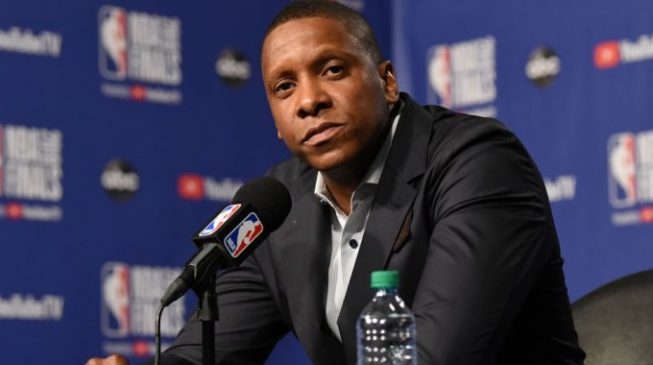 Masai Ujiri, Nigerian-born professional basketball general manager, became the centre of attraction across the internet for leading the Toronto Raptors to a historic National Basketball Association (NBA) championship in as many years.
Culled from TheCable, Raptors, a Canadian professional basketball team based in Toronto, emerged champions on Thursday after beating Golden State Warriors, the defending champions, in the best of seven NBA finals under Ujiri’s leadership.
They took the game down to the wire with a 114-110 for a 4-2 series victory to become the first team outside the US to win the championship at their NBA finals debut in their 24th season.
Last summer, the Nigerian-Kenyan basketball executive championed a trade to sign Kawhi Leonard, former NBA champion with Antonio Spurs — a move which many claim helped navigate the Raptors towards clinching the win.
Coming on the heels of his well-attested commitment to discovering African talents as a director of Basketball Without Borders (BWB), the NBA and FIBA’s global basketball development and community outreach program, Ujiri also signed on Pascal Siakam and Serge Ibaka from Cameroon and Congo respectively.
While newly signed Leonard eventually scored the most post-season points in the NBA and won the finals’ MVP award, the team emerged victorious in three of the last four championships and ranks as one of the greatest teams in the game.
Ujiri’s stock has also reportedly spiraled up after he earned himself a deal with the Washington Wizards which offered an annual $10 million to have him as president of basketball operations.
“Wizards owner Ted Leonsis is expected to reach out to Toronto ownership soon to request formal permission to meet with Ujiri and offer a staggering financial package that would include running the Wizards’ basketball operations and, perhaps, taking on a larger leadership role in the Monumental Sports and Entertainment company that oversees the Wizards and NHL’s Capitals,” confirmed Adrian Wojnarowski, sports reporter at ESPN.
WHO IS MASAI UJIRI?
Ujiri, 43, was born in Bournemouth, England, where his parents had studied. He, was, however raised in Zaria, Nigeria, after his parents moved back to the country when he was two years old.
Inspired by Hakeem Olajuwon, a Nigerian NBA star; American sports magazines; and VHS tapes of the NBA, Ujiri pursued his dream of playing college basketball. He subsequently joined one of Europe’s top leagues.
Over his six-year professional career, Ujiri played in England, Belgium, Finland, and Germany. His last play being in Denmark, where he ended his professional playing career in 2002, and worked as a youth coach in Nigeria.
In 2013, he signed a 5-year deal worth $15 million to become the general manager of the Toronto Raptors, replacing Colangelo in that capacity, and making him the first African general manager of the NBA.
His contract was later extended to include the team’s residency.