Menstruation: ‘I wish I was told NOT to be scared of it’ 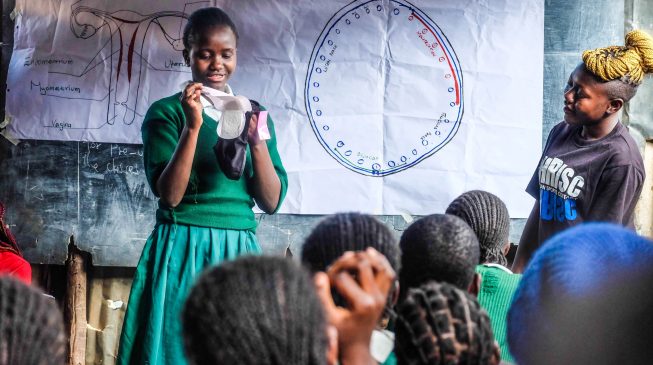 Gift Osakwe was in primary five when she noticed blood stains on her classmate’s chair. She called her attention to it and it was taken care of, that was Gift’s first time of coming across menstruation but she didn’t think it was something important.
When she got to junior secondary school, she was taught about menstruation in her first year. But she was shocked when she saw her period in JSS 2.
“I was scared because I didn’t know it happens to everyone,” Gift, who was 14 years old at the time, said.
She was in school when her period came. She had stood up to do something when her classmates called her attention to her stained uniform.
“I was scared and started crying. I stayed away from others all through that day. When I got home, I still didn’t tell anyone because I was afraid until my mum noticed my wet uniform,” Gift recounted.
Menstruation is an expected natural change that occurs in the female reproductive system, announcing a new phase in the lives of young girls. But many go through this cycle with little or no information about it.
Unprepared for the change that would take over their bodies, many young girls are often shocked and scared to see their menstruation, which comes unannounced in most cases.
While some girls were introduced to their periods through stomachache, some felt something trickling down their body, some just felt the wetness in their pant and some didn’t feel anything in their body.
Even though Gift had been privileged to see the arrival of her seatmate’s period and was taught about menstruation after then, she was still very scared when her period came.
Although it is a natural phenomenon in the lives of women, menstruation is still a topic discussed in hushed tones. While it is taught in some schools, many young girls still don’t understand it as they are limited to the definition of the subject matter.
“I was told in school that it is at the age of puberty that I would see my menstruation but I just thought it happens to older people,” Gift said.

MY MOTHER ALSO DIDN’T TELL ME ABOUT IT

A 2015 UNICEF report on the assessment of menstrual hygiene management in some Nigerian secondary schools revealed that there were inconsistencies in the subjects that addressed menstruation as well as information shared in schools.
It reported that the teachers, especially those in co-educational schools were uncomfortable to teach menstruation and menstrual hygiene.
Sadly, a lot of mothers, who are supposed to be the first instructors, are not teaching their girl-children about menstrual management.
“As close as I was to my mum as a child, she didn’t teach me anything about menstruation. I learnt most of the things I know from friends. I went to a boarding school and I saw how my friends did it,” Seun Folorunso, who was 17 years old at the time she saw her period, said.
She recalled that the only thing her mother said when she told her she had started menstruating was, “Huh, you started quite early.”
Although many Nigerian mothers fail to educate their children about menstruation, they expect them to be able to manage it when they see it.
“What do I want to talk to her about? I expect that when she sees it, she will tell me to give her money to buy sanitary pads. I didn’t talk to her about it because I didn’t see it as a big deal. My mother did not talk to me about it too and I was able to manage it myself till I got married,” Mrs Patience Onyinke, the mother of a young teenager, told this reporter.
Some mothers don’t discuss it with their daughters because they are clueless about how to start the conversation or confused about what to say.
“I did not tell my children about menstruation because I don’t know how to talk about it but I tell them to stay away from men during the morning devotion,” Mrs Rose Sunday, a mother of two female children, said.
In a case where a woman has more than one female child, the responsibility of educating the younger child is often entrusted in the hands of the older child even when she herself hasn’t been adequately educated about menstruation.
The knowledge gap in menstrual education is one of the many challenges young girls face in menstrual hygiene management.
Many young girls don’t understand what is happening to them, are clueless about how to fix their sanitary pads, how many pads to be used daily and how to monitor their menstrual flow.
“If a man touches you now, you will get pregnant; I have said my own. You have now become a woman,” Sarah Abe, who is now a young adult, got those words from her mother when she told her she had started menstruating.
Her mother’s statement is often the only explanation many young girls get from their mothers for what is happening in their bodies.
Unfortunately, the lack of sensitisation on menstruation is limiting many young girls’ capacity to properly manage their periods.

A DIRTY, SHAMEFUL EXPERIENCE? NOT SO! 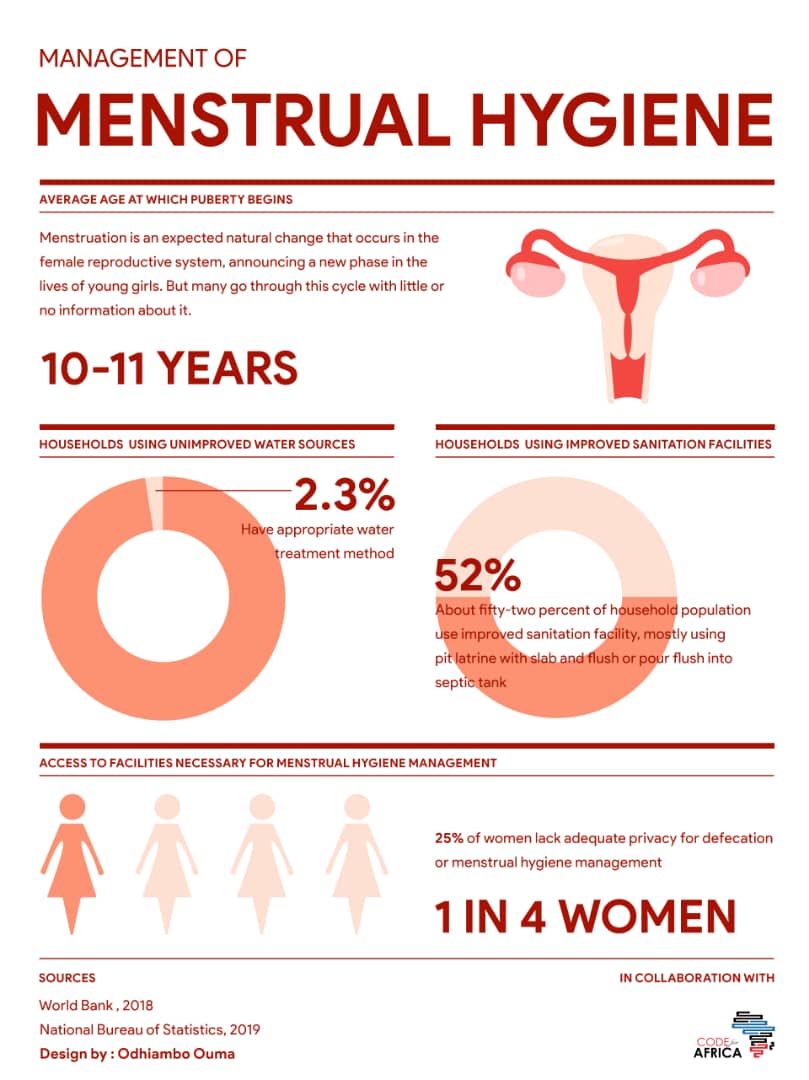 Many young girls didn’t know anything about menstruation before they started; some were lucky to hear about it in school or from friends, and some were totally in the dark about it.
“Girls lacked knowledge about puberty and menstruation: most girls stated that they had no prior knowledge about menstruation before menarche,” UNICEF said.
Unfortunately, many cultures still treat menstruation as something negative, shameful or dirty, and sometimes seen as a taboo, making the conversation a hard one to have.
“Participants believed that menstruation was a secret and unclean experience and expressed special fear that used menstrual hygiene materials could be taken for rituals that could cause harm to menstruating girls,” the UNICEF report revealed.
Now 17 years old, Gift wishes there were things she was told about menstruation before she started.
“I wish I was told not to be scared when I see it,” she said. “I wish I was told how to calculate my menstrual cycle. I also wish I was told what and what not to eat before the arrival of my periods because of the pain I go through during that time.”
Uninformed about how to take care of herself during menstruation, Rose Onyinke washed her vagina with soap while Olusola Apata didn’t know about panty liners used to avoid stains after menstruation.
Like many young girls, these girls wished they were properly informed about menstruation before they started and how to properly take care of themselves.

Obstetrician and gynaecologist, Lola Alao,  defines menstruation as the monthly blood flow from the womb of a girl child who has attained maturity.
“It lasts for  two to seven days every month, and it occurs anytime there is no sperm to fertilise the monthly egg growth,” she noted.
According to her, the menstrual cycle is a 28-day cycle but this may not be obtainable for every woman; a 22- or 34-day cycle is still normal.
“Your menstrual cycle is counted based on the length. You count from the first day of flow till another flow to determine your cycle length,” Alao said, explaining how to calculate a menstrual cycle length.
According to her, a girl is expected to have attained menarche between ages 14 and 16 but some girls start earlier, depending on their stature.
“What it means is that before this age, the absence of menstruation is not a problem but a lady who has no breast maturity and is yet to menstruate at 14 or 16 years old should see a doctor.”
Alao advised that a girl should change her pads two to three times a day, depending on her flow.
“However, where a girl changes more than three times a day, she is expected to see a doctor. No douching of any sort and bathing at least twice a day during the period,” she said.
Alao advised every woman with very severe pain to see a doctor to prevent problems like endometriosis.
For those with mild pains, she said painkillers could be used.
She, however, warned against using these drugs on an empty stomach as they could cause ulcer pains.
She described personal hygiene as the overall key to preventing infections. According to her, any form of bad hygiene around the vagina can cause infections, whether during a period or not.
“One good advice for young girls is that when they want to clean up after using the toilet, they should clean from the vagina back to the anus and not vice versa because that way, one will bring faeces from anus to the vagina, increasing the risk of vagina infection,” she said.

Interestingly, non-governmental organisations in Nigeria are rising up to the challenge as they are championing menstrual education, distributing sanitary pads to girls while teaching them what they need to know about menstruation.
However, Ayokunmi Ogunnaiya, a menstrual hygiene advocate for Padman Africa, said menstrual education should start from homes.
“Mothers are expected to educate their children on what menstruation is all about as early as possible,” she said.
She explained that mothers need to go beyond talking to showing their daughters what to do.
“Buy a pad and panties, show her the signs to watch out for, how to wear a pad, clean up after use, exercise to reduce pain, etc. I have heard of a child who was given pad in school by Always, when her period finally came, she didn’t know how to use the pad,” she said.
Ayokunmi also highlighted the importance of including menstrual hygiene education in school curriculums, adding that the boy-child should also know about it in order to help his family and friends.
She urged schools to have female counsellors who can attend to girl-children when they see their periods in school and educate them on how they can take care of themselves.
As the world celebrates the Menstrual Hygiene Day, Sola Abe, a freelance journalist, writes on the importance of educating young girls about menstruation, from Lagos.
Photo credit: WASH United

This article by Sola Abe was first published on TheCable