Obasanjo: It’s nice that Aisha Buhari is speaking out 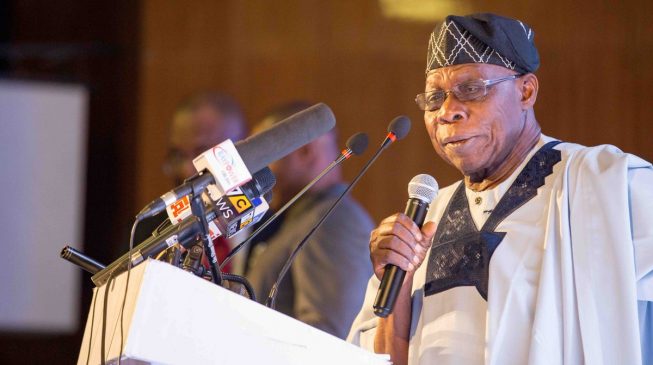 Former President Olusegun Obasanjo has commended Aisha, wife of President Muhammadu Buhari, for speaking out on Nigeria’s problems.
Speaking when Funke Fadugba, leader of Penpushing Media, visited him at his residence in Abeokuta, Ogun state capital, on Monday, TheCable reports that Obasanjo said the president’s wife may need to do more by engaging in pillow talk with him.
“It is nice that the president’s wife is talking. I think she did well, and maybe she should also have a pillow talk with the president,” he said.
“I believe every Nigerian family, individual, group is entitled to legitimate livelihood. It is the responsibility of all to make sure we have a dignified life. That should be our aim collectively.”
Aisha has been very critical of her husband’s government and those around him in recent times.
Few days after she, her husband and some of his close allies returned to the country after a five-day trip to Saudi Arabia, she sent a cryptic message to her husband to avoid “bad advisers”.
She had posted a video of Julius Malema, an influential South African politician, advising President Cyril Ramaphosa to be mindful of those around him.
Weeks later, she said the social intervention programme (SIP), an initiative of her husband, had failed in the north.
Although Maryam Uwais, senior special assistant to the president on social investment, dismissed the claim of Aisha, saying she spoke out of ignorance, Aisha stood her ground by insisting that the programme had lived below expectation.
Just on Saturday, she lamented over the widespread killings in the country, calling on security agencies to end banditry immediately.