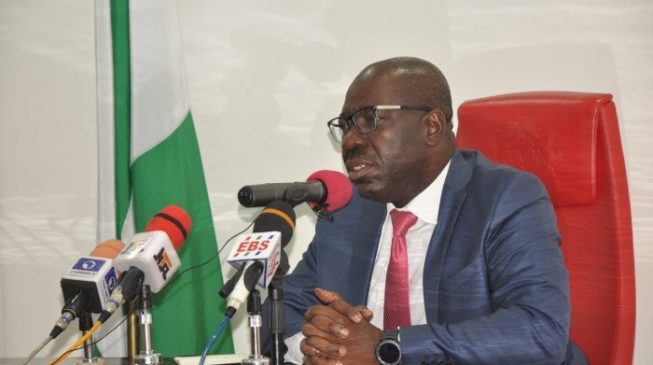 Some elected members of the Edo state house of assembly have accused Godwin Obaseki, governor of the state of attempting to truncate democracy.
The lawmakers made the allegation in reaction to the delay in inaugurating a new assembly after the expiration of the previous one on June 7.
Addressing reporters at the Nigerian Union of Journalists (NUJ) secretariat in Benin, Edo state capital on Monday, TheCable reports that Julius Osifo, a former commissioner for education, said the action of the governor was against the interest of the state.

“Today, we members-elect of the Edo state house of assembly wish to bring to the knowledge of the people of Edo State and the general public of the attempt by Governor Obaseki to truncate democracy,” he said.
“The governor, by virtue of Section 105 (3) of the Constitution of the Federal Republic of Nigeria, (as amended), is constitutionally required to immediately issue a letter of proclamation for the inauguration of the new Assembly to avoid vacuum.
“There cannot be democracy without legislature, because it is the legislature that gives credence to democracy.”
Osifo accused Obaseki of deliberately refusing to allow the house of assembly to function, thus usurping powers of the legislature.
He alleged that Obaseki’s delay in inaugurating the assembly is to enable him impose his preferred candidates on the lawmakers.
“It is also common knowledge that the governor, no matter how powerful, cannot impose individuals either as Speaker on legislators. At best, he can only lobby for his preferred candidates as was witnessed at the National Assembly,” he said.
He called on the people of the state, including oba of Benin and the leadership of the APC, to prevail on Obaseki “to immediately issue letter of proclamation to enable the Assembly to function and to avoid constitutional crisis.”
John Mayaki, chief press secretary to the governor, could not be reached for reaction as he neither responded to calls nor text message.