Oshiomhole inherited ‘huge mess’ from you, APC fires back at Oyegun 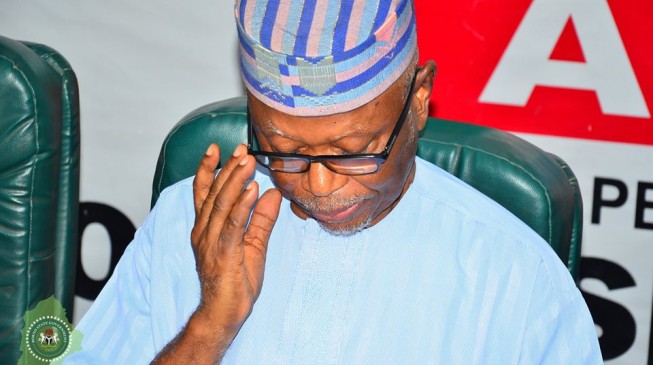 The All Progressives Congress (APC) has accused John Oyegun, its former national chairman, of handing over a dysfunctional party to his successor.
Speaking to journalists on Tuesday in Abuja, TheCable reports that Lanre Issa-Onilu, APC’s spokesman, said the former national chairman was responsible for the indiscipline and impunity in the party.
Oyegun, who left office in 2018, had accused Adam Oshiomhole, his successor, of lacking the capacity to lead a political party in the 21st century.
He had said he should not be held accountable for Oshiomhole’s “leadership failure”.
But Issa-Onilu blamed Oyegun for the disunity in the party and some of the challenges the party encountered in the 2019 general election.
“Let me agree that the NWC that led the party into the 2015 elections and continued till June 2018 did nothing different from what you would find in PDP,” Issa-Onilu said.
“It was a period the party was seen as a mere vehicle to attain political office. The system accommodated impunity as certain members appeared to be superior to the party. Their interests were far more important than the collective interests of the APC, even when most times such interests are at variance with the ideals the party stand for.
“You would recall that it was under that leadership that some impudent members of APC called the bluff of the party by imposing themselves on the National Assembly as leaders contrary to the position of the party. Where was the party? Where was the discipline when this happened? It would be difficult to calculate what lack of courage to assert the party supremacy cost APC over that period. The consequences of the inaction of the party were unimaginable.
“We all saw the consequences on governance as the National assembly practically held our government to ransom. The impunity, which President Muhammadu Buhari has rightly described as lack of patriotism, constituted an unfortunate hindrance to the smooth running of government.”
Issa-Onilu said the reason why the Peoples Democratic Party (PDP) bounced back to claim some states from the APC was because the ruling party did not live up to expectations.
“The leadership under Chief Oyegun, with due respect to him, condoned all sorts of acts of indiscipline from certain members, ” he said.
“It is not surprising that the current National Working Committee inherited such a huge mess, where the party was struggling to differentiate itself from the delinquent PDP. We all know that PDP was practically dead following the devastating defeat of 2015. The PDP bounced back not because the party has changed its insidious way or did anything different, but because APC did not live up to expectations.
“It goes without saying that when an organisation is unable to enforce its own rules, it would suffer the consequences sooner than later. We should not be ashamed to say that our party’s leadership under Chief Oyegun lacked the courage required to confront the pockets of political despots who could not operate by the party’s rules.”