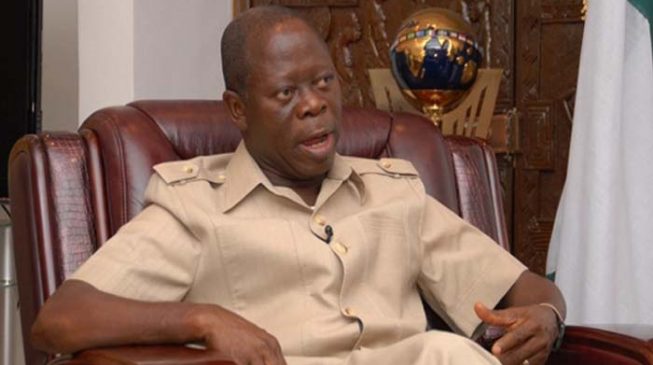 Adams Oshiomhole, national chairman of the ruling All Progressives Congress (APC), says he expects Godwin Obaski, governor of Edo state, to follow the examples of President Muhammadu Buhari.
Speaking with state house correspondents during the weekend, TheCable reports that the APC chairman accused Obaseki of violating the constitution regarding the inauguration of nine members of the Edo house of assembly.
Although he did not mention the name of Obaseki, it was clear that Oshiomhole was referring to the governor.
The Edo assembly is currently divided into two as a result of the feud between Obaseki and Oshiomhole.
Advertisement

Last week, nine house of assembly lawmakers, said to be loyal to Obaseki, had edged out their colleagues by taking oath of office “secretly”.
Reacting, Oshiomhole wondered why the governor could not follow the steps of Buhari who issued a transparent proclamation for the national assembly.
“How can I be a governor physically presiding over people who are more endowed than me? But with the law on my side, people take a bow because the law protects me,” he said.
“So it’s about rule of law. You know the law provides for how the house should be proclaimed transparently the day it’s announced. Members-elect are informed of date and time for inauguration. These are clearly spelt out in the Nigerian constitution.
“President Buhari did it transparently. He has led us by example. For me, it’s very embarrassing if any state governor, particularly of APC extraction, will do anything that is less than what the constitution says and the example that our president has set.
“So, you know that what happened in Edo was that they did not publicize a proclamation letter; the members were not informed, they did the inauguration at 9:30pm in what in a Supreme Court judgement call nocturnal hours.
“Business of parliament is done transparently; they are not secret cult. Now, you have a 24-member House: 19 members protested. You have six and you carry people in their short knickers. Even in the House they have rules, the dress code. So, it happened in Edo, it has happened in Bauchi.”
Oshiomhole, who influenced the emergence of the governor, also dismissed those referring to him as the godfather of Edo politics.
On Sunday, John Oyegun, former national chairman of APC, described Oshiomhole as the biggest distraction of Obaseki.
Oyegun asked Oshiomhole to allow Obaseki focus on governance, saying the issue of godfatherism is heating up the state.
However, the chairman of the ruling party said having fought godfathers, it is impossible for him to toe that line.
“I am a democrat. That I accept the credit, not only that I fought godfatherism, I launched the one man, one vote campaign to fight against election rigging anywhere in Nigeria and by the special grace of God under PDP with Anenih alive, and at his best, I won all the 18 local government areas and I won 95 percent of the total votes cast in my second term election,” he said.
“So, Edo people know me and I know them. I don’t need shortcut to sustain my position in the system. But you know that there is nobody in Nigeria who is not open to accusations. The important thing is that he who accuses should give you evidence.”