The internet was abuzz on Monday after Tonye Cole, billionaire politician, shared his flight experience on how Wole Soyinka, Nobel laureate, was asked to vacate a seat by a passenger onboard.
TheCable reports that Cole, the co-founder and former group executive director of Sahara Group and Energy, had taken to his Instagram page to narrate how a young passenger insisted that the foremost playwright must leave the window seat assigned to him.
This was despite pleas from him and the cabin crew.
“I met one of the greatest Nigerians walking on earth and as with other times, he was genteel, witty, forthright and humble. My smile gives me away as he permitted the picture whereas he would have preferred to get back to his newspapers,” he wrote.

“Then we boarded the flight and after assisting him with his bags, he took the window seat and promptly started reading again.
“A few minutes later, this young man, baseball cap, t-shirt to show his muscled chest and tattooed biceps boards the plane and tells prof he’s on his seat (which he was). Those of us including the cabin crew tried to reason with bobo fine to let the old man be but the chap refused. He insisted prof should vacate his window seat, which the old man quietly did for his original aisle seat next to him.
“I couldn’t understand how we got to this point where we no longer have respect for elders, even if we are so ignorant of the great global personalities. Is it too much to ask that an elderly man be allowed to remain in a seat allotted to you in the same business class cabin and the same row? Na wa o.”


The plane incident has become a hotly debated topic on social media platforms. It has also stirred outrage and condemnation from all quarters.
While some users were of the opinion that “a younger Soyinka” would have done the same if roles were swapped, others dragged the young man to the mud for being so “utterly disrespectful”.
The politician, who ran for the office of governor of Rivers until the Independent National Electoral Commission (INEC) disqualified the All Progressives Congress (APC), his party, was also not spared in the backlash.
“Any diligent reader of Wole Soyinka will know that he would have insisted on his seat as a young man. Yes, our culture demands respect for elders. But undue entitlement by senior citizens, especially when the premise is wrong, should always be resisted. That’s why we are here,” a Twitter user said.
“Tonye Cole tries to paint an image in our heads with the way he described the young man so as to convince us that the guy is wrong -prof Wole did the right thing by not resisting -young man was not wrong for asking for his seat -shame on you Tonye and all who make a big deal,” another user said.
Here is what some Nigerians had to say: 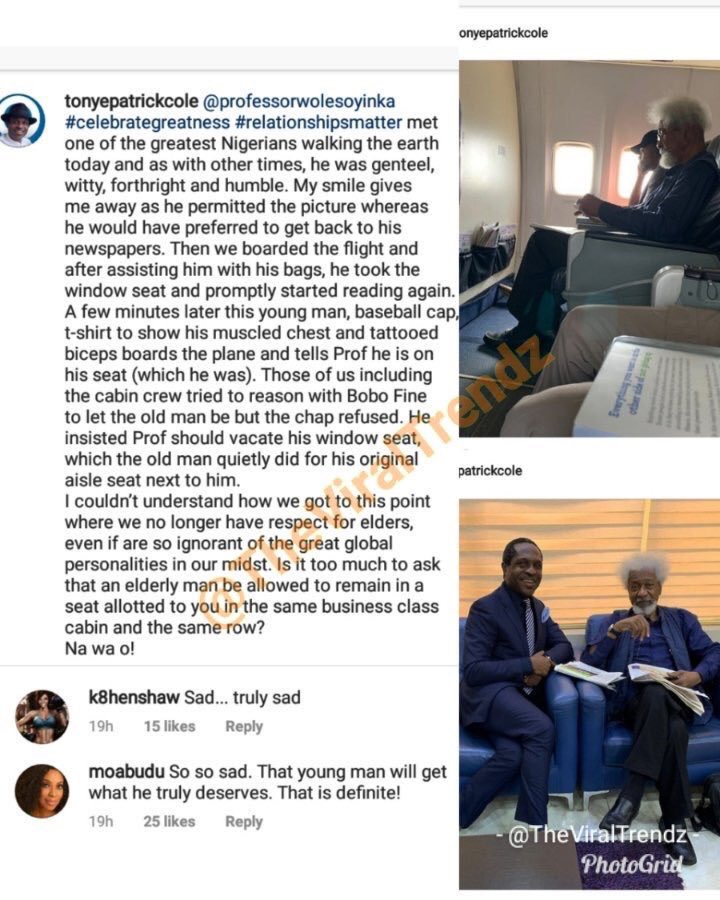 -prof wole did the right thing by not resisting

-young man was not wrong for asking for his seat

-shame on you Tonye and all who make a big deal

Any diligent reader of Wole Soyinka will know that he would have insisted on his seat as a young man.

Yes, our culture demands respect for elders. But undue entitlement by senior citizens, especially when the premise is wrong, should always be resisted. That's why we are here.

1,351 people are talking about this

My own is: why didn't Oga Tonye give up his own seat for Prof Wole Soyinka since he was so invested in respecting the elderly (because even the Prof quietly moved when asked).

Sadly, a lot of elderly Nigerians are entitled bullies who don't understand the reciprocity of respect

24 people are talking about this

I really think Wole Soyinka might just have been cheekily hoping the person in the seat wouldn’t turn up. The caption says he quietly moved. The problem is the Tony guy who posted it. Embarrassing.

1,170 people are talking about this 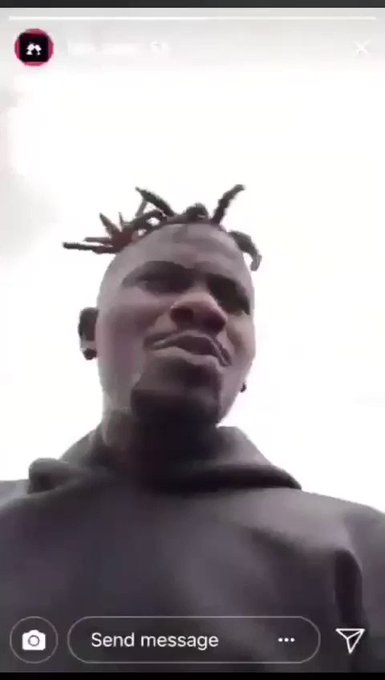 bearded tattooed guy: Excuse me sir, you’re in my seat

Every other person : Don’t you know Wole Soyinka?

Many of the guys supporting that guy here will easily give up their seat for Wole Soyinka. It's his rightful seat no doubt but the plane won't crash if he doesn't seat there, the same goes to Wole Soyinka. Home training won't even allow me argue with him sha.

Even people that would fight for their allocated seats on God Is Good Motors are bashing the poor guy.

The guy did the right thing jhoor.

I'd gladly do the same if I were him.

42 people are talking about this

Kate Henshaw, Mo Abudu, Ali Baba their comments on this issue is typical "Lick ass!!! This are the people who want a working system in Nigeria. A young Wole Soyinka wouldn't give up his seat for William Shakespeare or Victor Hugo. https://twitter.com/TheViralTrendz/status/1143105388344160256 …

Viral Trendz@TheViralTrendz
Nigerian billionaire politician, Tonye Cole , shares his flight experience about a young man who 'disrespected' professor Wole Soyinka by asking for his allotted seat which the prof sat on.

But my question to Mr Tonye Cole is, was his own seat by the Window ?? If yes, did he offer his seat to Prof Wole Soyinka??

Older Nigerians (especially we the Yorubas) seem pissed about this Wole Soyinka issue. It's funny because there's probably all this outburst because it is Wole Soyinka. Someone less prominent and I doubt we'll be having this conversation.

Bros Wole Soyinka. Na my seat be that o but nothing spoil. As per G wey you be, enjoy the view. Meanwhile abeg sharply pose for the camera. Make tension my village people.

890 people are talking about this

The younger Wole Soyinka they told us about would’ve started a riot there and then to get his seat.
— Dapper Don (@skinnyniggr) June 24, 2019

Personally, it would have been a great honour & opportunity to share a row with Wole Soyinka. In fact, I would pay to sit with him.

45 people are talking about this

I'm team window seat and I always check in online to select seat 4A or 4F just so I can balance well and stretch my legs. On a good day I should give away my seat for a Wole Soyinka but if I decide not to do that, no one should question my morality cos I've done no wrong.

28 people are talking about this

There is no case here! Professor Wole Soyinka rightly left the seat as it wasn’t allocated to him and that’s it.
Tonye Cole is just making a mountain out of a molehill.

Let's be reasonable here. This young man was damn right to have asked Wole Soyinka to stand up from his own seat that he paid for. Respect for elders shouldn't come in when elders wants to deliberately cheat the younger ones. No matter who you think you are, respect yourself.

Just what if Wole Soyinka took that seat because he was told upon boarding that free seating was allowed and not because he didn’t expect that anyone would ask him to leave it because of his respectable status? Because the only person we know cried about respect was the Cole man

It does not have to be Wole Soyinka, is a pity that young man will get old some day & realize what it means to be an ELDER! What is there in a window SEAT that he can’t give up out of respect? When am in an occasion I stand up from my front row & go behind for an Elder to seat!

Let the professor speak for himself!

You are tearing shirt over another man's issue. Yet, you lots would do the same on a queue, inside Danfo etc.

Prof. Wole Soyinka has proven himself refined unlike most Nigerians that would argue their way out of such situation.

I love Prof Wole Soyinka but he shouldn’t have taken another person’s assigned seat. This ‘respect’ and ‘small boy’ mentality is one of the ills plaguing our nation.