Oyebade briefs the press on policing activities in the Zone XI 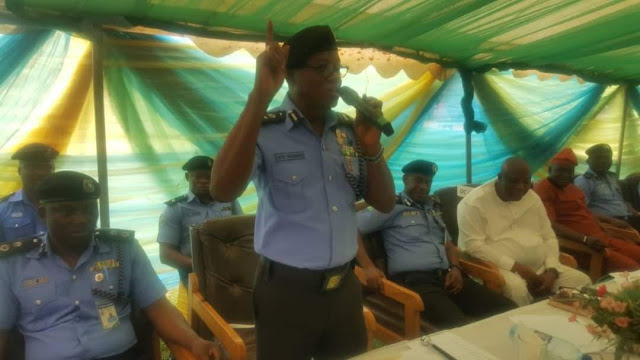 Here's the briefing below...


Gentlemen of the Press, we welcome you to this special press briefing taking place today. We consider it imperative as part of our community policing philosophy to connect with the people by giving them feedback about policing activities in Ondo, Osun and Oyo States which are the three composites of Zone XI.

The first half of the year has been a concatenation of high expectations, daunting challenges and enormous successes. In other words, this period has been very eventful in terms of policing. Just a few months ago, the general elections were held. Before then, there were palpable fear and tension. However, the elections were eventually held amid adequate security in the three states. Contrary to expectations of pessimists, the elections were conducted successfully. They were free, fair and credible such that the professionalism displayed by the police which culminated in the success of the elections was commended by Nigerians and even international observers.

As the election period passed, we were confronted by another challenge of sustaining the peace which characterized the pre- election, the elections and post-election periods. Therefore, we reappraised our security architecture vis-a-vis the omnibus security roadmap early designed upon my assumption of duty as the Assistant Inspector-General of Police in charge of the Zone. These include proactive approaches such as aggressive stop and search, vehicular patrol to enhance visibility policing, clamp down on criminal hideouts through intelligence-led raid, discreet investigation and diligent prosecution.

Part of the bold steps taken to ensure peace, security in the zone was the establishment of a technical platform to nip heinous crimes in the bud. Through the technical platform, members of the public can reach out to the police and give useful, and credible information. Not only that, the Zonal Security Stakeholders’ Forum was also inaugurated on 25th April, 2019. The Forum which received the blessings of the Inspector-General of Police was established to encourage and promote participatory policing. Similarly, the Operation Puff Adder, a brainchild of the IGP, was earlier inaugurated in the Zone on 17th April, 2019 and subsequently in the three commands. The aim of the newly created operational outfit is to complement existing security apparatus not only in the zone but throughout the country. The Operation Puff Adder takes the ongoing fight against heinous crimes to the doorstep of criminal elements across the country.

As the Fourth Estate of the Realm, and as part of our strategic partners you deserve to be briefed to enable you carry out (as you have always done professionally) your traditional responsibility of informing and educating the public. We are, therefore, glad to inform you that our efforts in providing robust security in the zone has been quite rewarding. There has been improvement in the security of the zone safe for isolated cases which we are dealing with. We have made modest achievements in terms of arrest of criminal elements, recovery of cache of arms and ammunition, recovery of stolen vehicles and other valuable property.

We carry out our constitutional duties without fear or favour and without prejudice bearing in mind the truism that crime has no colour; it has no ethnic, racial or religious boundary and our actions transcend religious or racial bigotry. We have been sedulous, calculative, fair, just and professional in the arrest and prosecution of all suspects irrespective where they come from. Our actions or inactions are geared towards peace and security of the entire zone. However, some anti-social elements whose activities are inimical to the peace and security of the three states under the zone have been arrested in circumstances too numerous to mention here. But a few of the arrests and recovery made are recounted here for the purpose of this briefing.

ARREST OF ARMED ROBBERY AND MURDER SUSPECTS: In Ondo State, some criminal elements who dared to test our ability for discreet investigation, trailed a cashier to the church and gruesomely murdered him after robbing him of the sum of five hundred thousand naira belonging to the church which the victim had gone to withdraw from one of the new generation banks in Akure, Ondo State. Though we lost the victim to the beastliness of the murderous, blood-thirsty, dare devil armed bandits who fled the scene afterwards, the relentless efforts of our men led to the arrest of some members of the criminal gang responsible for the dastardly act. The suspects are currently in custody and are assisting in our investigation to apprehend other members of the vicious gang. This is just one of the numerous achievements made by the Ondo State Police Command during the period under review.

ARREST OF NOTOROUS, DREADED CULTIST: Efforts of the Osun State Police Command in the fight against cultism yielded a positive result recently when its Operation Puff Adder operatives nabbed one Bello Oluwafemi (a.k.a. Blade), a suspected cultist who had been on a wanted list of the Police Command. The suspect, until his arrest on 4/5/2019, had been terrorizing higher institutions and their host communities. This also is one of the many achievements of the command recently.

HARVEST OF ARRESTS AND RECOVERY OF CACHE OF ARMS AND AMMUNITION: The Oyo State Police Command has not been relenting in its fight against heinous crimes. The state through the Special Anti-Robbery Squad, the Operation Puff Adder, the Anti-Kidnapping Squad and similar anti-crime outfits has recorded unprecedented achievements between January and June this year. One of such laudable achievements is the recovery of over 3,000 cartridges from an armed robbery suspect recently. The command also recovered several stolen vehicles, motorcycles, and other valuable property in addition to suspected cultists and ritualists nabbed.

Some suspected members of the NURTW who caused breach of public peace over motor parks in some parts of Ibadan, the Oyo state capital were promptly arrested. They have since been arraigned in court.

KIDNAP GANG SMASHED: The Zonal Command Headquarters too, in its effort to clamp down on heinous crimes, recently through the Technical Intelligence Response Unit smashed a gang of kidnappers led by a 32- year-old Jimoh Adamu Omotayo.

ARREST OF OPERATOR OF UNREGISTERED QURANIC SCHOOL, AND OUR FIGHT AGAINST ALL FORMS OF DEGRADING AND INHUMAN TREATMENT: As police officers empowered to protect lives and property, it is our concern to prevent that which could be injurious to the sanctity of human life. It is on account of this that the Zonal Operation Puff Adder acting on credible intelligence, busted an unregistered Quranic School, at Kehinsi Compound, Ita Baale, Beyeruka area, Ibadan where Islamic students numbering over 45 comprising male, female, juvenile and adults where kept and subjected to the most excruciating, inhuman and degrading treatment. The frail and malnourished students who relived their harrowing experience in a squalid environment that could best be described as a pig sty, were often locked up like prisoners in cell-rooms where they ate and defecated. They were poorly fed, and were denied access to medical treatment. They were also frequently given corporal punishments. Intelligence gathered also revealed that some of the female students (aged between 8 and 19) were often subjected to all forms of sexual abuses including defilement.

Consequent upon intelligence on the illicit activities of the school, operatives of the Zonal Operation Puff Adder swooped on it and rescued the victims who had been deprived of their personal liberty through unlawful detention. The operator of the said school, Alfa Mojeed Oyelami, ‘m’ (43) who claimed to be an Islamic Scholar, was also arrested with three others, Mohammed Gazali, ‘m’ (25), Mutiu Abdulakeem ‘m’ aged 26, and Ajayi Segun ‘m’ aged 26, suspected to be his accomplices. The distraught victims who have been subjected to emotional trauma and psychological torture are currently undergoing post traumatic examination. The juvenile among them were after liberation, taken to the Juvenile Welfare Home, Ibadan for rehabilitation.

As we give account of our activities today, we would like to say with all sense of modesty that the successes we celebrate today would not have been possible but for the support of the Inspector-General of Police, Mohammed Adamu, NPM, mni and his management team. Also, the achievements would not have been made without the support of the state governors who have been magnanimous by donating various fighting equipment such as patrol vehicles, body armour and other logistic support. But like the insatiable Oliver Twist, we ask for more to enable us render better quality service to the good people of the three states. We cannot but also appreciate the cooperation of the media and the public who have always been part of our success story.

As we transit to the second half of the year, we are determined to fight crimes with unprecedented vigour, and uncommon patriotism. We are resolutely committed to providing an enabling environment conducive for peace, and for the political and socio-cultural development of the three states. We want to sound loudly a note of warning to the criminal underworld and other undesirable elements who make life unbearable for law abiding citizens to seek legitimate means of livelihood or risk arrest and prosecution. As for those who are already in our net, we shall arraign them in court as soon as investigations are concluded.