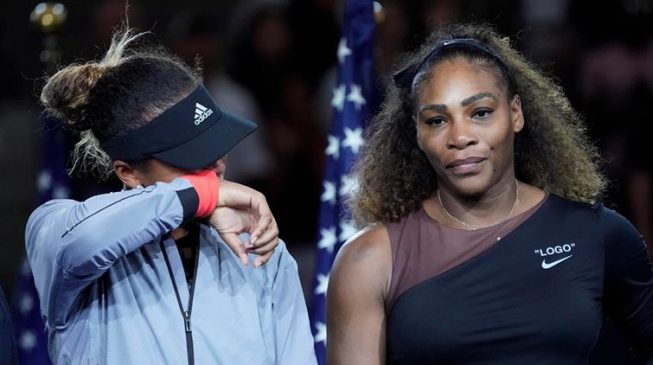 Tennis legend Serena Williams and top-seeded World number one player, Naomi Osaka, both crashed out of the French Open at the third round on Saturday.
According to TheCable, Williams, 37, was stunned by fellow American and teenager, Sofia Kenin, while Osaka fell to Katerina Siniakova, both stars of the tournament coming in straight sets.
Rising star, Kenin, 20, who is ranked 35 in the world, overcame boos from the crowd to stun Serena 6-2 7-5 on the clay court of the Roland Garros Grand Slam tournament.
Kenin, who was born in Moscow but raised in Florida and idolizes Serena Williams, took advantage of sloppy play from Serena to break the 23-time grand slam winner twice and close out the first set 6-2.
She, however, had to hold on in the second set with some fearless shots which included wrong-footing Serena Williams mid-court to claim a monumental victory in her burgeoning career after one hour and 32 minutes.
This latest defeat means Williams’ quest of equalling the record of 24 Grand Slam singles titles currently held by legendary Margaret Court would wait till the next Grand Slam tournament in Wimbledon.
Naomi Osaka, however, had an erroneous day at work, hitting 38 unforced errors to surrender the match in one hour and 17 minutes.
Winner of the last two Grand Slams in USA and Australia, the 21-year-old Japanese’s bid for a third was lethargic in her first tournament as the world number one women’s tennis player.
Winner of the doubles tournament last year, 23-year-old Siniakova did not have to do much to close out the match 6-4 6-2.
Kenin will play eight-seeded Ashleigh Barty, while Siniakova would slug it out with USA’s Madison Keys in the quarter-finals.