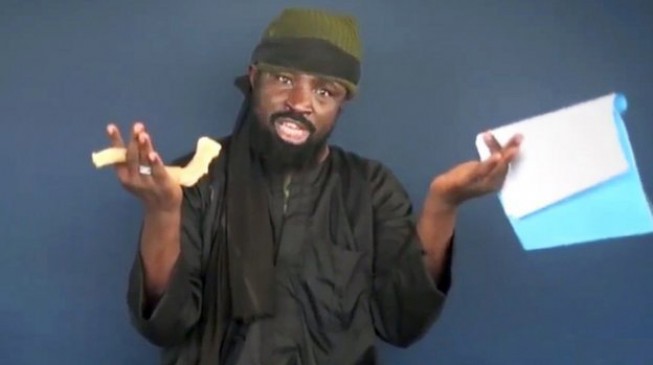 Abubakar Shekau, factional leader of Boko Haram, has been seen in a new video reading the group’s ideology and the Nigerian national pledge, which he denounced as “shirk.”, According to TheCable.
Shirk, in Islam, is the sin of idolatry or worshiping of anyone or anything besides the singular God.
In a report, Ahmad Salkida, an investigative journalist known to have access to the leadership of the group, said Shekau was seen in the video clutching an AK 47 rifle as he read a prepared speech in Arabic about the doctrines of the insurgent sect.
Sakilda said Shekau appeared to be impaired as he read the speech.
“The factional leader of Boko Haram that have been weakened by an internal feud that led to the emergence of another faction in 2016 and persistent military campaign by the Nigerian Army and the Multinational Joint Task Force appeared to have impaired eyesight as he struggled to read his group’s ideology in Arabic, while intermittently reciting Nigeria’s National pledge in English, which he repeatedly said was an act of Shirk,” the journalist said.
Salkida said the 35-minute speech “may be targeted at the international jihadi community.”
“Shekau may be reaching out for support, according to analysts, which rival groups in the region enjoys, by clearly highlighting the group’s doctrines,” he said.
The journalist promised to release “detailed translation” of the video “shortly.”
It is not clear when the video was released.