Under left or right, Denmark is set to adopt ever harsher policies against migrants 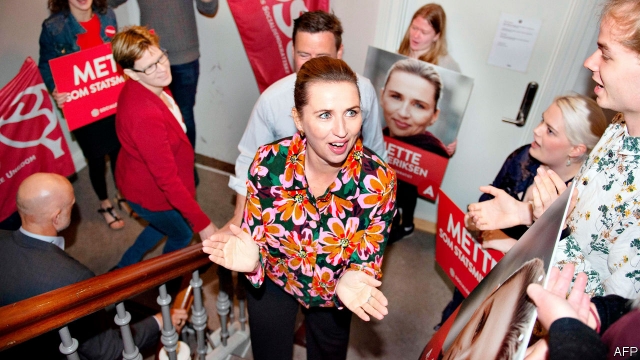 FOR A striking example of how far-right parties can change the politics of a democratic Western country, even without ever holding office, look no further than to wealthy, well-ordered Denmark. The anti-immigrant Danish People’s Party (DPP), which was first elected to the Danish parliament in 1998, has relentlessly pushed mainstream parties into adopting ever harsher policies towards immigrants, often Muslims, The Economist reports.


The general election, which takes place on June 5th, will confirm the trend. The country of 5.7m has been ruled since 2015 by a centre-right alliance led by the Venstre party under the prime minister, Lars Løkke Rasmussen. Lacking a majority, Mr Rasmussen has had to rely on the votes of the DPP (which also supported centre-right governments between 2001 and 2011).

Venstre is polling at just 18%, and will probably lose to the Social Democrats (SD), on 29%. The SD ruled Denmark for most of the 20th century and built much of its generous welfare state. But don’t expect it to bring much change when it comes to dealing with foreigners. In the bidding war for Denmark’s increasingly strident anti-immigrant vote, the SD is promising more limits on foreigners.


The DPP’s influence has helped to normalise xenophobic and Islamophobic sentiments. Last year Mr Rasmussen rolled out a plan to banish asylum-seekers to an isolated island, once used as a research centre for contagious diseases in animals, if they cannot be deported because of humanitarian concerns.
Parliament has passed laws banning women from wearing the burqa or other face coverings in public. It allows officials to confiscate cash, jewellery and other valuables from asylum-seekers, supposedly to pay for the cost of their upkeep in asylum centres. This year it approved a “paradigm shift” under which the country’s asylum policy will focus on repatriation instead of integration. This means the government can deport refugees whose countries it deems safe enough, such as Somalia (even though a Danish delegation that visited the country in 2015 to assess its security situation did not dare leave the airport).


Mr Rasmussen also announced a policy to eradicate “ghettos” by 2030. Denmark defines these as neighbourhoods with lower income and education levels, and higher unemployment and crime rates, than the national average, and over 50% “non-Western” residents. Seeking to avoid the creation of “parallel societies”, the policy forces such areas to cut social housing to 40% of the total housing stock. For example, in Tingbjerg, a suburb of Copenhagen classified as a “hard ghetto”, all homes are social housing. Local housing associations are required to demolish buildings, build new private homes or sell property to investors. The policy also demands that children in these areas must attend publicly funded nurseries and take classes in “Danish values”, or risk losing benefits. Those who commit crimes in the “ghettos” will face harsher punishments than if they commit them elsewhere. Critics say that the policy places a stigma on immigrants; they argue that blaming foreigners ignores the underlying reasons for Denmark’s social problems, such as unemployment.


In stark contrast to parties on the left in other Nordic countries, such as Sweden and Finland, the SD has proposed taking these policies even further. Even as she steers her party further to the left economically—pledging to raise taxes on the rich, for instance—the SD leader, Mette Frederiksen (pictured), is moving to the right on immigration. The SD has proposed an annual cap on “non-Western” immigration, and a limit to the share of “non-Western” students that schools are allowed to enrol at one time. Foreign senior citizens who give up their Danish residency would be allowed to take their state pensions with them if they moved back to their countries of origin.
Ms Frederiksen has even flirted with the idea of co-operating with the DPP if she wins power. If you can’t beat them, join them.