‘We are not persecuting Christians’ — FG writes British parliamentary group 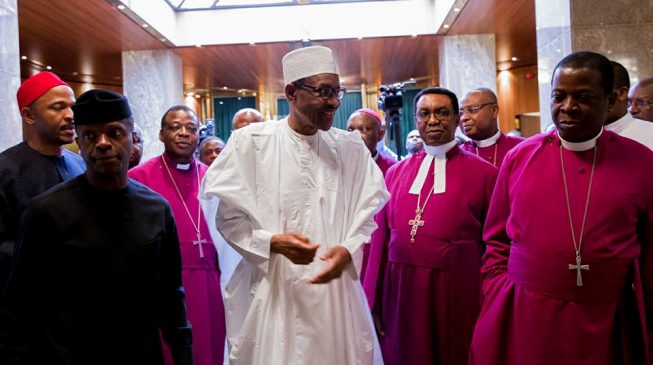 The federal government has refuted claims that the administration of President Muhammadu Buhari is alienating Christians.
Garba Shehu, Buhari’s spokesman, made this known in a statement on Thursday.
According to the statement, the claims were made by a group “styling itself as Northern Christian Elders Forum”.
Shehu said the federal government’s response was contained in a letter to the British parliamentary group, signed by George Oguntade, Nigeria’s high commissioner to the United Kingdom.
In the letter, TheCable reports that the Nigerian government denied the allegation that the Boko Haram insurgents were used to fight Christians in the country, describing the claim as “inconceivable and outrightly false”.

“It would be useful for me to engage with this process to ensure that you are thoroughly briefed on the situation in Nigeria,’’ Oguntade said in the letter.
“The safety and security of all Nigerians, whatever their faith, is a fundamental priority of the Buhari government. The government knows that Nigeria can only achieve its potential if there is religious tolerance and cooperation.”
Oguntade said Buhari’s cabinet is balanced between Muslims and Christians.
He explained that Vice-President Yemi Osinbajo is a pastor, adding that the president “has befriended church leaders and groups both within and outside Nigeria.”
Oguntade said Osinbajo had maintained regular contacts with Christian and Muslim leaders as part of efforts to build and sustain interfaith dialogue.
He also said the country’s security challenges had no ethnic and religious colouration, noting that the farmer/herder clashes predated the Buhari-led administration.
He said Buhari’s administration had taken major steps to address the root cause of the crises pitting Muslim and Christian farmers against the herders so that Nigerians can live in peace with one another.
He assured the international community that the Buhari administration would ensure “the competition over scarce land is resolved peacefully for the benefits of all parties”.
The high commissioner also said the Boko Haram insurgents “who kill both Muslims and Christians do not represent Islam”.
He said: “Boko Haram is a murderous death cult whose savagery has destroyed thousands of lives. The government is totally dedicated to eradicating their stain from our land.
“Since the Buhari administration has been in power, Boko Haram has been significantly degraded – with the support and assistance of the UK Government.
“We shall not rest until this mission is completed and the people of North East Nigeria – both Christians and Muslims – can live in peace again.”