Who really killed Alex Badeh and why are his alleged killers not in court? 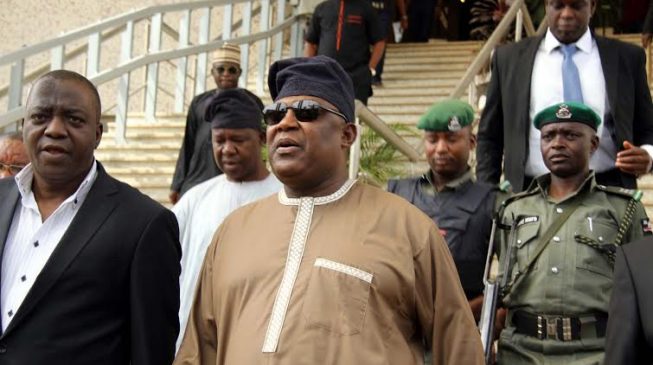 A lot of people have always believed Alex Badeh was killed by the Buhari government and that a cover-up was in place. There couldn’t be more justification than the Badeh family coming out to dismiss the recorded confession of one of the alleged killers  in custody as a mere charade.
A close look at the story surrounding his death  will reveal some quite intriguing questions but what has lent more credence to the notion that Alex Badeh was murdered and that a cover-up was hatched is the refusal of the authorities to charge his alleged murderers to court.
On the 27th of December 2018,police spokesperson, Jimoh Moshood said the police won’t parade the suspects arrested in relation to the killing of the former CDS on that date so as not to jeopardize the ongoing investigation.However on that same day, a video surfaced of one of the suspects narrating how they killed Badeh. In one day the police contradicted itself on a matter as sensitive as the killing of the immediate past Chief of defense staff who is being prosecuted in court for corruption by the present government. The release of that video going by the narrative of the police implies that the investigation has been concluded.Why haven’t those same persons been charged to court six months later?.
Advertisement

Alex Badeh’s family in puncturing the confession of the suspect in custody by the name of Shuaibu Rabi, pointed out that the former CDS couldn’t possibly have enough to buy a new farmland as it was no secret to them that he was broke. As a matter of fact, Badeh had told his employees at the farm that he could only keep 3 of them and was letting 5 of his 8-man staff go.
The family added that he didn’t have up to N500 on him at that time. A villager who approached him for money on that same day to buy ‘Paracetamol’ for his headache was told to take 10 mudus (measured quantity of maize) and sell at the market because he had no cash on him. He also took out time to tell the person that he was at the farm himself to pick up some maize for sale because the government had blocked his pension and that he was unable to pay his cook and cleaner.
Badeh further told him there was a huge refuse pile at his house which the Abuja environmental protection board had not cleared because he had no money to pay. This rhetoric sounds more in line with reality.
The EFCC freezes the bank accounts of a person accused of corruption. Whether out of genuine sympathy for Boko Haram victims or to exact revenge for how he may have treated the President as a soldier in the past, the Buhari administration has not obeyed court orders releasing former NSA, Col. Sambo Dasuki (rtd) on bail. Nobody would safely put it past them to deny Badeh his pension contrary to the position of the law.
The air force has said it gave Badeh security befitting his status but the whereabouts of his detail(s) as at the time he was shot is still a grey area. He was said to be in a Toyota Tundra truck only with a driver who was injured and a friend who was abducted by the assailants/robbers who claim they heard he was coming to buy a piece of land in cash.
The arraignment of the suspects in court would have doused suspicions of a cover-up and since that hasn’t happened, government has allowed conspiracy theories to fester.
There is the version that he was privy to some of the shady dealings of current Chief of Army staff, Lt.Gen Tukur Buratai, while serving under President Jonathan and that he had to be silenced for Buratai’s good. Buratai has been accused of buying 2 properties in Dubai.One in 2013 from a contract he allegedly cornered for the purchase of vehicles and motorcycles and the other just days after being appointed COAS.
He is also alleged to own an exotic snake farm. Badeh being the most senior military officer in the Jonathan administration knew a lot of things and had to be eliminated.
There were concerns over online videos of Fulanis with guns singing Pro-Buhari songs and the second theory adds another dimension to it.The theory basically stands on the notion that the Fulani herdsmen have always had the backing of the highest level of government and that Badeh was fed to them.Yet another says that the persons in police custody didn’t commit the murder and that they were mere decoys to be released when the dust had settled.
People pay more attention to these stories in their quest to know what is stopping government from charging the 5 persons it has been holding for 6 months to court for Badeh’s murder.There are a plethora of persons that have been arrested by this administration and dumped in jail without trial.Persons as high up as former DSS boss, Lawan Daura, who is still being detained after his arrest about a year ago but one would ordinarily think the Buhari administration had a full grasp of the sensitivity of the Badeh situation.
He wasn’t just immediate past Chief of defense staff,he served under a PDP government whose members Buhari has been accused of selectively targeting. Badeh was the most high profile assassination we have had in a long while and with everyone watching, most of us thought even just for the optics,government wouldn’t want to appear nonchalant.
Everyone has been quiet; from the Presidency down to the police.Was it the plan all along to kill off the case after the dust had fully settled? Are the alleged killers even still in detention? Who really killed Alex Badeh and why are his alleged killers not in court?

This article by Umar Sa'ad Hassan was first published on TheCable. Hassan is a lawyer based in Kano.