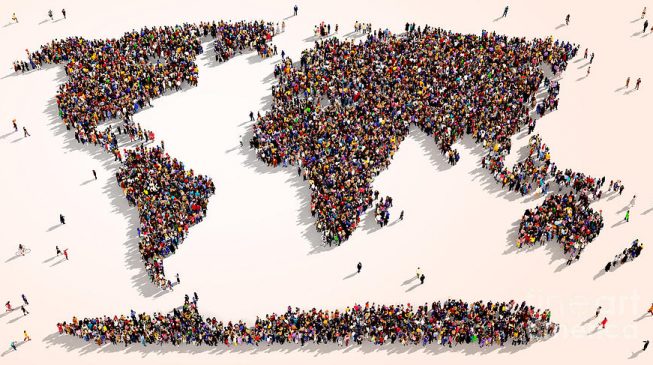 The population of the world hits an estimated 7,713,468,000, the United Nations Population Division said on Monday.
According to the World Population Prospect released by the UN on Monday and analysed by TheCable, the medium-variant projection indicates that the global population could grow to around 8.5 billion in 2030, 9.7 billion in 2050, and 10.9 billion in 2100.
TheCable reports that the fine data also shows that males outnumber females in Nigeria, and the world as a whole, negating the popular belief that women outnumber men in the West African country.
Nigeria is estimated to be at 200,964,000 as of mid-year 2019, with 99,132,000 million females and 101,832,000 males.

Men outnumbered women in the 1991 and 2006 censuses conducted by the Nigerian government.
On the globe, there are an estimated  3,889,035,000 males and 3,824,434,000 females.
QUICK FACT: Fertility in Nigerian women equal to or greater than four live births per woman, making Nigeria one of the most fertile countries in the world
The population of Africa has risen by over 32 million in the past year, raising the numbers to over 1.308 billion people on the continent.
United Nations Department of Economic and Social Affairs (UNDESA) says “with a projected addition of over one billion people, countries of sub-Saharan Africa could account for more than half of the growth of the world’s population between 2019 and 2050”.
“The world’s population is projected to grow from 7.7 billion in 2019 to 8.5 billion in 2030 (10% increase), and further to 9.7 billion in 2050 (26%) and to 10.9 billion in 2100 (42%). The population of sub-Saharan Africa is projected to double by 2050 (99%),” the report read in part
“Other regions will see varying rates of increase between 2019 and 2050: Oceania excluding Australia/New Zealand (56%), Northern Africa and Western Asia (46%), Australia/New Zealand (28%), Central and Southern Asia (25%), Latin America and the Caribbean (18%), Eastern and South-Eastern Asia (3%), and Europe and Northern America (2%)”.

The world is getting older, and so are the inhabitants; in 2018, for the first time in history, persons aged 65 years or over worldwide outnumbered children under age five.
Projections indicate that by 2050 there will be more than twice as many persons above 65 as children under five.
The UN also revealed that the populations of “both Pakistan and Nigeria more than doubled in size between 1990 and 2019, with Pakistan moving up in rank from the 8th to the 5th position and Nigeria from the 10th to the 7th position”.
Nigeria is still projected to be the third most populous country from 2050 to 2100, with a population of 733 million at the end of the century.
“After this re-ordering between 2019 and 2050, the ranking of the five largest countries is projected to be preserved through the end of the century, when India could remain the world’s most populous country with nearly 1.5 billion inhabitants, followed by China with just under 1.1 billion, Nigeria with 733 million, the United States with 434 million, and Pakistan with 403 million inhabitants,” the report read.