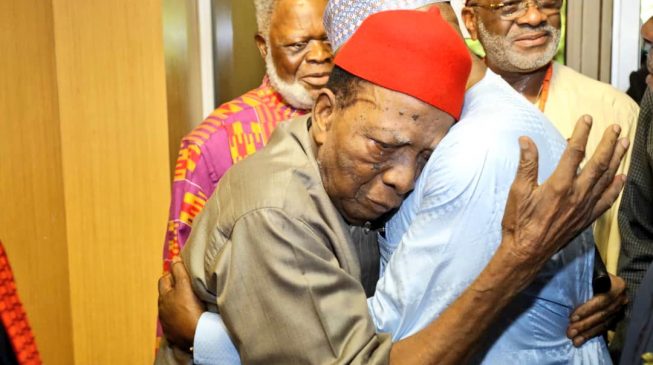 Ben Nwabueze, constitutional lawyer, appeared as the lead counsel of Atiku Abubakar, presidential candidate of the Peoples Democratic Party (PDP), at the tribunal on Thursday.
Atiku and the PDP started calling their witnesses at the presidential election petition tribunal in Abuja on Thursday.
TheCable reports that Nwabueze, who was earlier wheeled into the courtroom, appealed to the court to be allowed to be seated while addressing the bench, and his request was granted.
Advertisement

While struggling to announce the names of the lawyers in his team, Livy Uzoukwu, a senior advocate of Nigeria (SAN) who had been the lead counsel, came to his rescue.
After the announcement on appearance was over, Nwabueze spoke briefly, thanking the tribunal for for granting his first request.
He said despite his age, he attended the proceedings to show the importance of the case. Nwabueze said the outcome of the tribunal will have an impact on future elections.
He left the court while proceedings were ongoing. Nwabueze endorsed Atiku in the buildup to the 2019 elections.