Adeboye to Fatoyinbo: You’ll be exposed if you continue sinning under ‘grace’ 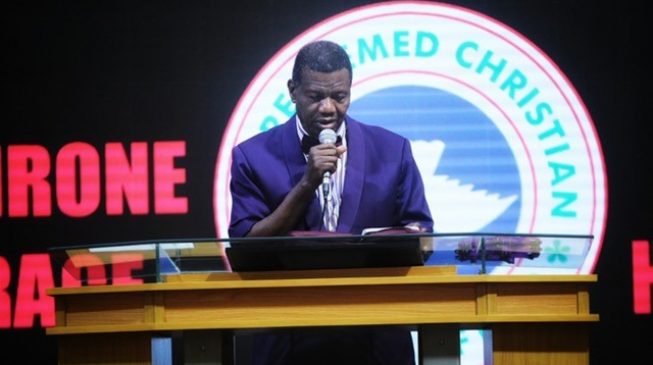 Enoch Adeboye, the general overseer of the Redeemed Christain Church of God (RCCG), says Christians who continue living in sin under the guise of grace will be exposed.
TheCable reports that Adeboye made this statement on Friday night in light of the allegations of sexual immoralities being levelled against pastors, the most recent being Biodun Fatoyinbo, senior pastor at the Commonwealth of Zion Assembly (COZA).
Busola Dakolo, a celebrity photographer, had alleged that Fatoyinbo had sexual relations with her without her consent when she was 16 going on 17. A former worker of the church, who prefers to remain anonymous, has also alleged that he raped her in while working at the church’s branch in Dubai.

Speaking at RCCG’s monthly Holy Ghost Service, Adeboye, who did not mention names, said everything that has been done in secret will be revealed; no matter how long it takes.
Read his full statement below:
I don’t want to comment on some happenings. You know I have always told you when people ask me why don’t you talk? I say I am under authority. The Redeemed Christian Church of God belongs to CAN and we belong to PFN and in CAN we have a president, in PFN, we have a president.
Whatever they say, that is what I have said. That is why I keep my mouth shut but I feel compelled to say some things to those who young, upcoming ministers of God. Everything I will say is from the bible so if you want to criticise what I have said, you have to criticise the bible.
It is written, there is nothing hid that shall not come to the open or made manifest (Mark 4:22). It doesn’t matter how long, you think you’ve done something and it is covered that it will never come to the open? Then you can go and throw away your bible because the one who said this is Jesus Christ. There are people who think that people like me are old fashioned. I agree, I am old fashioned and I am old fashioned because Jesus is old fashioned. God is not fashionable, he only wears light.
Sooner or later, your sins will find you out if you continue in sin under the guise of grace according to Numbers 32 verse 33. It is sure. If you have given your life to Jesus Christ, the blood of Jesus will wash away all your sins but after you gave your life to Jesus, you continue in sin under the guise of grace? As the Lord lives, your sins will find you out.
Abstain from every appearance of evil (Ist Thessalonians 5: 22). The elders say, they want to burn you and you rub yourself with oil and sat near a fire; you have made the job easy. The elders say, they are calling you a thief and you are playing with the child of a goat. The elders say what you are not going to eat, don’t smell.
The bible says if the devil comes to fight you, stand and fight. Resist the devil and he will flee from you. But according to 2nd Timothy 2: 22, when you find yourself facing youthful lust, don’t wait to fight, flee. When you see a sister smiling at you in a coy way, run. Don’t say I’m a great man of God, I’m highly anointed; ask Samson. I know that you will say ‘he has come again, he is an old fashioned man’, I agree. That is what they call me when I say that I will never have a private secretary who is a woman. The private secretary has to be a man because when a woman accuses you of something, nobody is going to listen to you. They will listen to the woman.
When you say where is witness, sister will say do they invite people to such things? When you say ‘how can it be me’? Everybody will say how come it is you that she has mentioned of all the men?
I am old fashioned but I was ordained in 1975 and I’m still surviving. It is better to be old fashioned and live than to be modern and die. I have not said anything, only the bible has been speaking.
Fatoyinbo has since taken a leave of absence from the church.