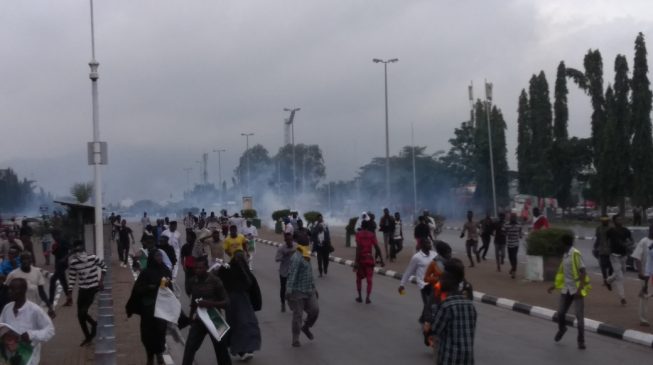 Members of the Islamic Movement in Nigeria (IMN) better known as Shi’ites clashed with the police at the federal secretariat, Abuja, on Thursday.
According to TheCable, the IMN members who clashed with policemen during a protest at the national assembly on Tuesday, returned to the streets of Abuja on Thursday.
Wielding placards and chanting anti-government songs, the protesters demanded the immediate release of Ibrahim el-Zakzaky, their leader.

They had converged on the federal secretariat and were marching towards Eagle Square when they were intercepted by armed  anti-riot policemen.
A witness told TheCable that trouble started when the police  demanded to speak with leaders of the protesters and two men: Nura Marafa and Mujaid Mohammed, who came forward were arrested.
In annoyance, the Shi’ites were said to have attacked the policemen who opened fire and also used teargas on them.
Workers at the secretariat reportedly fled in different directions in order to avoid being caught in the incident.
While debating on the action of the Shiites at the house of reps on Wednesday, some lawmakers called on the federal government to release Zakzaky in order to prevent the sect from degenerating into another Boko Haram.
Different courts have ordered the release of the Shi’ite leader but the federal government has not complied with the orders.

Onofiok Luke, a Peoples Democratic Party (PDP) rep from Akwa Ibom state, said it is unfortunate that the federal government has continued to disobey the orders to release the IMN leader.
“If the court has given an order for the release of the man, we should cal on the government to release him. The discourse should not be on the invasion of the national assembly alone,” he had said.