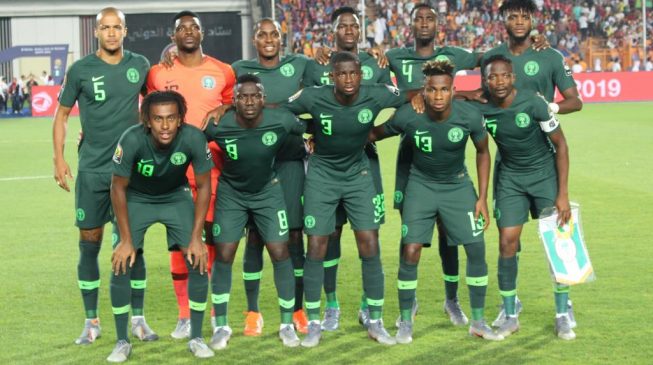 Algeria senior football team finally broke the 29-year jinx with a 2-1 win over the Super Eagles of Nigeria at the semi-final match at the ongoing 2019 Africa Cup of Nations.
The last time Algeria won the title was in Algiers 29 years ago.
TheCable reports that a brilliant free kick from Riyad Mahrez ensured that Algeria defeated Nigeria 2-1 in the Africa Cup of Nations (AFCON) at the Cairo International Stadium on Sunday.
Match referee was Bakary Gassama from Gambia.
Senegal emerged victorious in their semifinal at the 30 June Stadium, meaning the winner of this game will face the Teranga Lions on Friday night in Cairo.
ADVERTISEMENT
The game got underway in Cairo with Algeria donning all white, while Nigeria suited up in their dark green second kit.
Nigeria looked a little sharper in the opening minutes. The Super Eagles tried to use their pace and width to good effect.
Belaili whipped a great cross from the left, Daniel Akpeyi missed the ball and Bounedjah – perhaps surprised that the ball even reached him – failed to turn it home from close range. It was huge let off for Nigeria’s defence.
There was sustained pressure from Algeria, with the Super Eagles needing William Troost-Ekong to make an important block on Guedioura’s shot.
Odion Ighalo cleverly won a free kick in the final third. Samuel Chukwueze looked for an in-swinging effort with his left foot, but the ball drifted out for a goal kick to Algeria.
A free kick was awarded wide left for Algeria. Bensebaini had a free header but put it over the bar. Another great chance was spurned by the North Africans.
Belaili looked to put Bounedjah in behind the defence, but Kenneth Omeruo did well to nip in front of the forward and quell the danger.
Eagles skipper Ahmed Musa cut inside from the left and shoot on goal, but it was a tame effort and easily held by Mbolhi.
It was a good battle developing between Iwobi and Guedioura, with the latter doing well to keep the Arsenal playmaker at bay.
Bounedjah nicked the ball off Omeruo just outside the box and was faced with only Akpeyi to beat, but the shot was straight at the goalkeeper. A third big chance went begging for the Fennec Foxes.
In the 31st minute, Chukwueze fired on goal direct from a free kick, but Mbolhi made a solid save.
Striker Bounedjah tumbled in the box under a challenge from Troost-Ekong, but the referee dismissed the appeals for a spot kick.
Jamilu Collins was credited with a great recovery challenge to deny Bounedjah another chance at goal. The two teams trade swift counter attacks for some breathless play.
Striker Ighalo had a snapshot from just inside the penalty area, but he sent a low effort wide of Mbolhi’s right-hand post.
Five minutes before half time, Algeria raced in front. There was great work from Mahrez down the right flank, his cut-back deflected off the foot of Collins and hit Troost-Ekong, who did nothing to prevent an own goal.
The Fennec’ lead was a fair reflection of the match, given the chance they had already spurned.
There momentary danger in the Algeria bloc when Ighalo charged down a defender’s clearance, but the ‘keeper was on hand to tidy up.
Algeria had a deserved lead at the break, while Nigeria needed to get their attack in gear in the second stanza.
The game was back underway in the second half, with no changes from either team at the break.
Algeria certainly did not sit on their lead, as they continued to dominate possession and pushed forward through the likes of Belaili and Mahrez.
Musa looked to break through on the edge of the box, but he was crowded out by Algerian defenders.
Hardworking Iwobi tried a long range shot, but the ball skipped well wide of the mark.
The Eagles were awarded a corner kick. Chukwueze crossed and Mbolhi made a fine catch in the middle of the penalty area.
Nigeria struggled to get their passing game going through midfield. The Super Eagles were below their best, but while was only 1-0 they were still very much in the game.
Chukwueze and Iwobi started to come more into the game, Nigeria began to find some rhythm in attack.
There was VAR check for a potential handball from Mandi in Algeria’s 18-yard area following a screamer from Oghenekaro Etebo.
Mandi was booked and a penalty was awarded to the Super Eagles. It was not a controversial call… clear handball inside the box.
Ighalo tucked home the penalty and it was 1-1 between the teams in the semifinal as at 72 minutes.