Algeria will be tougher than Cameroon, S’Africa, says Ighalo 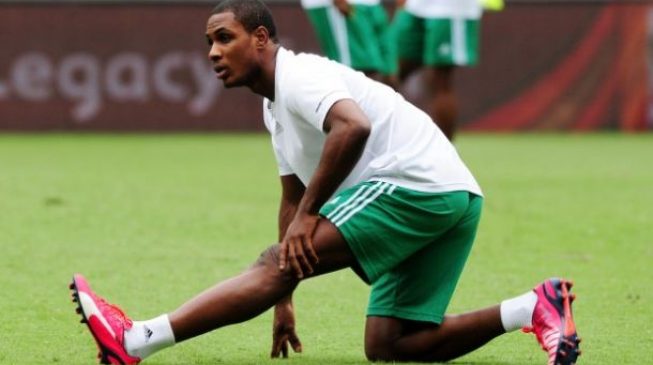 Odion Ighalo, Nigeria’s point man at the 2019 Africa Cup of Nations in Egypt, says the semi-final clash against Algeria will be “tougher” for the Super Eagles than previous matches.
Ighalo, however, admitted to TheCable that the Eagles are ready for Sunday’s battle against the Fennecs, with plans to win it.

The 30-year old said the three-time African champions team is built to be tough.
“It’s going to be even more tougher than the game we played yesterday again South Africa and Cameroon,” Ighalo said.
“It’s going to be a tough game. They are a very tough side, compact team. But we are looking forward to it because we are built for this toughness and we are going all out on Sunday to win it.”
The Shanghai Greenland Shenhua revealed that he will be happy to become the Super Eagles highest goal scorer but that his priority remains to put the team first.
Ighalo, Adam Ounas of Algeria, Sadio Mane of Senegal and Cedric Bakambu of DR Congo have three goals each as the highest goal scorers in Egypt so far.
“I will be happy if I become the highest goal scorer but like I have said before, I always put the team performance ahead of mine.
“Mine is to just do my own job on Sunday, goal or no goal, as long as we win the game I will be very happy.
“Yes, I thank God and I am very very happy that the team qualified for the semi-final because nobody gave us the chance to get to where we are today.

“This is my first AFCON tournament and I am happy that we are in the semi-final.”
The Super Eagles will face Algeria in the semi-final of the 2019 AFCON at the Cairo International stadium on Sunday, 8pm Nigerian time.