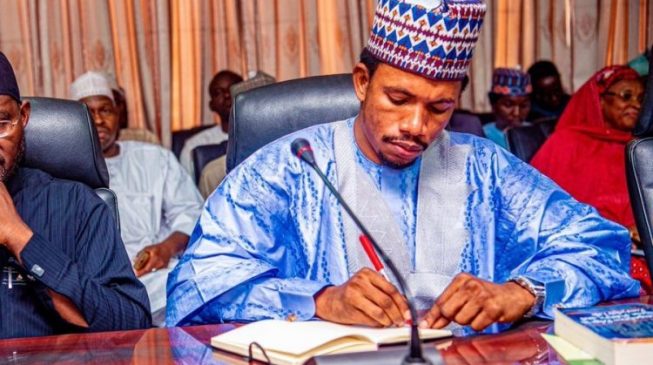 Twenty-four hours after he made the headlines for a wrong reason, Elisha Abbo, senator representing Adamawa north, tendered apology to the attendant he attacked at a sex toy shop in Abuja. He also sought forgiveness from Nigerians, describing himself as an ambassador of Christ who fell short of expectations.
A closed-circuit television (CCTV) footage had shown Abbo repeatedly hitting a woman he identified as Bibra, after which he asked policemen seen in the video to arrest her. The incident sparked outrage after it went viral. Many had asked the lawmaker to step down, calling on the police to arrest and prosecute him immediately.
Mohammed Adamu, inspector general of police, later ordered that a comprehensive probe be carried out into the incident while the senate also set up a committee to investigate him. One day after he apologised, he turned himself in to the police.

For acknowledging his guilt, TheCable reports that  Nigerians are now divided over the issue. While some appealed that charges should not be filed against him, others are insisting that the law should take its course.

WHAT’S THE LAW POSITION ON ASSAULT

The criminal code act (2004) stipulates a three-year jail term for anyone found culpable of assault.
Chapter 29, subsection 255 reads: “Any person who unlawfully assaults another and thereby does him harm is guilty of a felony, and is liable to imprisonment for three years.”
Chapter 25 subsection 252 of the act says: “A person who strikes, touches, or moves, or otherwise applies force of any kind to, the person of another, either directly or indirectly, without his consent, or with his consent, if the consent is obtained by fraud, or who by any bodily act or gesture attempts or threatens to apply force of any kind to the person of another without his consent, in such circumstances that the person making the attempt or threat has actually or apparently a present ability to effect his purpose, is said to assault that other person, and the act is called an assault.
“The term ‘applies force’ includes the case of applying heat, light, electrical force, gas, odour, or any other substance of thing whatever, if applied in such a degree as to cause injury or personal discomfort.”
The act further says in subsection 253 that “an assault is unlawful, and constitutes an offence unless it is authorised or justified or excused by law” .
In subsection 360, it says, “any person who unlawfully and indecently assaults a woman or girl is guilty of a misdemeanour, and is liable to imprisonment for two years.”

CAN HIS DEFENCE SAVE HIM?

In his initial response, the senator had said the video was edited. He said it did not capture the moment when he was assaulted. He alleged that his sister had been beaten at the shop before his attention was called.
Even if the full footage shows that Abba was also assaulted, he should have, as required of a law-abiding citizen, reported the incident to relevant authorities.
However, he took the law into his hands and the long arms of the law may just be about to catch up with him.
If it is proved that Abbo was also assaulted, then whoever assaulted him is liable to imprisonment for three years, as subsection 353 of the act states that “any person who unlawfully and indecently assaults any male person is guilty of a felony, and is liable to imprisonment for three years.”
Photo credit: ICIR