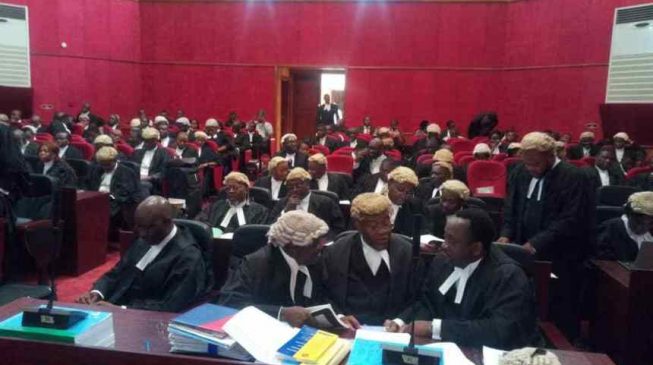 Counsels of President Muhammadu Buhari, the Independent National Electoral Commission (INEC) and the All Progressives Congress (APC) have all objected to an application by the Peoples Democratic Party (PDP) to present its star witness.
The star witness is Segun Showunmi, spokesman of the Atiku Abubakar presidential campaign.
TheCable reports that at the tribunal on Monday, Chris Uche, counsel to the petitioners, applied that they present their star witness.
Uche said in the course of the his testimony, video clips would be played.
ADVERTISEMENT
But Faseyi Akintola, counsel to APC, told the tribunal that they ought to have been informed before they brought their star witness and new evidence.
Also, Alex Izinyon, Buhari’s lawyer, objected saying they had been “ambushed” with the development.
“Your lordship they are not part of the documents listed,” he said.
Uztaz Usman, INEC counsel, argued that the presentation of the witness and evidence was not part of what they lawyers agreed on.
“What the media will be reporting will be another thing. We were taken by surprise. This does not comply with first schedule of evidence act,” Usman said.
But Uche said: “Let’s make progress, you can bring your own video.”
The tribunal led by Mohammed Garba said the agreement the INEC counsel spoke about was not binding on the court.
Speaking again, Akintola wondered if he would be able to object to the video even after it is played, the tribunal answered in the affirmative.

The tribunal is yet to rule on their objections.
The court is currently on a break and it is expected that a ruling will be delivered when it resume.