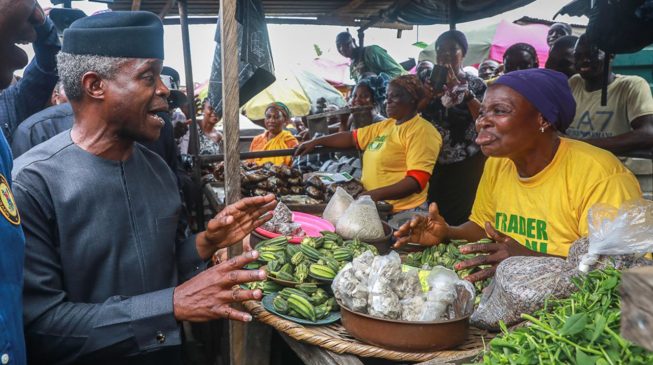 Former Vice-President Atiku Abubakar says Nigeria may “collapse under unsustainable debt” going by the country’s current debt profile.
Reacting to the latest figures from the Debt Management Office (DMO), Atiku linked the debt profile to some of the federal government’s policies such as Tradermoni.
Tradermoni is loan programme of the federal government for artisans and petty traders. It is coordinated by the office of Vice-President Yemi Osinbajo.

The DMO data released on Wednesday showed Nigeria’s debt increased by N560 billion within three months.
The agency said the total debt stock as of March 31, 2019, stood at N24.9 trillion compared to the N24.3 trillion as of December 31, 2018.
In a statement issued on his behalf by Paul Ibe, his spokesman,  TheCable reports that Atiku said Nigeria’s debt profile is now at the stage where “all genuine lovers of Nigeria ought to raise an alarm”.
The Peoples Democratic Party (PDP) presidential candidate attributed the increasing debt to four years of “profligate spending” and “irresponsible borrowing.”

“What could this junta have needed that amount for?” he asked, adding that the dates covered by the latest debt figure “fall on the period of electioneering, when monies were freely distributed by officials of this government in the name of Tradermoni and other election gimmicks that were discontinued after the election.”
He said it is inconceivable that Nigeria could have had such “unprecedented borrowings” amidst “unimaginable sorrowing” among citizens.
He said this is responsible for Nigeria’s emergence as the world capital of extreme poverty as well as the high rate of out-of-school children in the country.
“As someone who headed the National Economic Council that paid off Nigeria’s entire debt under the visionary leadership of President Olusegun Obasanjo, Atiku Abubakar has the moral authority to call those who are turning Nigeria into a beggar nation to halt the drift into unsustainable borrowing,” the statement added.
“We cannot continue to borrow to pay salaries and support luxuries. Already, over 50% of our revenue is going towards debt servicing, not even debt repayments.
“We raise this alarm as responsible citizens and call on other lovers of Nigeria to speak up as we have no other nation to call our home, but Nigeria.”
TheCable sought the reaction of Garba Shehu, presidential spokesman, to Atiku’s claim but he did not immediately respond to a text message sent.