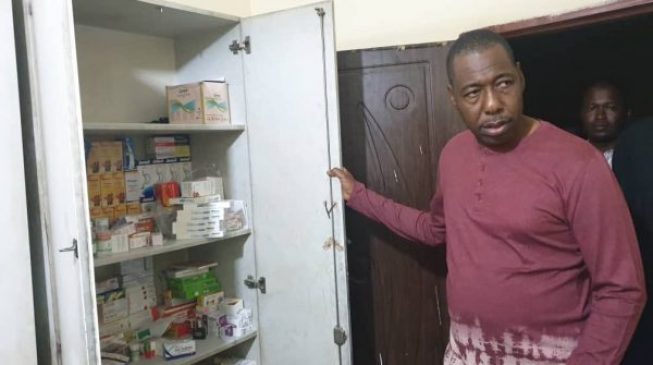 Babagana Zulum, governor of Borno state, has directed the immediate suspension of the medical director at the Umaru Shehu Ultra-Modern Hospital alongside four medical doctors who were absent when he visited the hospital on Tuesday night.
TheCable reports that Isa Gusau, spokesman of the governor, disclosed this in a statement on Wednesday.
ADVERTISEMENT
The suspended doctors are Audu Usman, medical director of Umaru Shehu Hospital; Musa Chuwang, Chijioke Ibemere; Baba Malgwi and Esther of the paediatric department.
Zulum had paid an unscheduled visit to the state specialists’ hospital and Umaru Shehu Ultra-Modern Hospital around 1am on Tuesday to inspect the condition of patients and the facilities but found out that none of the doctors were on ground for their duty.
He had reportedly instructed nurses to call the doctors on phone during his visit but none responded.
The governor directed the chief medical director of the state hospitals management board to comply with the directive.
‎”Governor Zulum has ordered the suspension of the Medical Director of Umaru Shehu hospital, Dr Audu Usman, for his failure of leadership,” the statement read.
“Furthermore. Dr. Musa Chuwang and Dr. Chijioke Ibemere who absented themselves while on call has also been suspended while Dr. Baba Ali Malgwi who was second on call is suspended arising from his inability to respond to telephone calls during the Governor’s visit.
“At the same time, frantic attempt to reach him was impossible even when he lives within the doctors’ quarters located around the hospital. Similarly, Dr Esther of the paediatric department who was supposed to be on duty was found absent and hence, she is also suspended.
“All medical doctors attached to the accident and emergency unit are to be queried for their absence and the lack of duty roaster. Chief Medical Director of the Borno State Hospitals Management Board is directed to comply with the Governor’s directive while he is to take measures that should ensure all gap are filled.
ADVERTISEMENT
“Governor Zulum is determined to ensure that all hospitals across Borno State provide adequate healthcare delivery at all times through.”