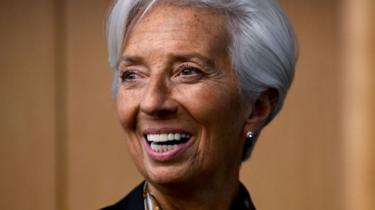 Christine Lagarde has said she will step down as managing director of the International Monetary Fund (IMF).
BBC reports that it comes ahead of a decision on her nomination to become head of the European Central Bank (ECB).
Ms Lagarde said she would leave the IMF on 12 September.
ADVERTISEMENT
"With greater clarity now on the process for my nomination as ECB president and the time it will take, I have made this decision in the best interest of the fund," she said.
"The executive board will now be taking the necessary steps to move forward with the process for selecting a new managing director."
The former French cabinet minister has been head of the IMF since 2011.
If the European Council approves her ECB nomination, she will become the central bank's first ever female leader, responsible for the euro and the monetary policy of the eurozone.
Known as the "rock star" of international finance, Ms Lagarde, 63, began her career as a lawyer before moving into politics.
She served in various ministerial posts under Nicolas Sarközy before being elected as the first female boss of the IMF - replacing Dominique Strauss Khan.
Who will take over at the IMF? The nominations will start coming in soon enough. But the selection raises once again an old sore in arrangements for the leadership of the IMF and the World Bank.
There was a post-Second World War understanding - or carve-up if you prefer - that the top job at the IMF would go to a European, while an American would run the World Bank. Christine Lagarde continued that tradition.
She was the IMF's fifth French managing director. The issue was last reopened earlier this year, when a vacancy suddenly arose at the top of the World Bank. President Trump's nominee, David Malpass got the job. There have been challenges to the established practice.
When Ms Lagarde was selected, the Mexican central banker Agustin Carstens ran against her, and there were non-European nominations before that. It would not be a surprising if there were more this time. So far, however the post war deal has held up.
Consistently ranked among the top 10 most powerful women globally, Ms Lagarde has helped to rebuild the IMF's credibility following Greece's 2010 bailout, which bent the fund's rules.
She also presided over the IMF's biggest bailout, a $57bn deal for Argentina last year that many credited with arresting emerging market turbulence.
Last year, she was reported to have said "no, no, no no, no no" when asked if she was interested in running the European Central Bank (ECB).
However, she later described receiving the nomination as "an honour".

The role is likely to test the silver-haired 63-year-old, who has admitted before that she lacks economic experience. Dark clouds are hovering over Italy's banking sector and the bloc is in the midst of a slowdown.
However, one former IMF official said her leadership of the fund meant she was "exceptionally qualified" to run the ECB.