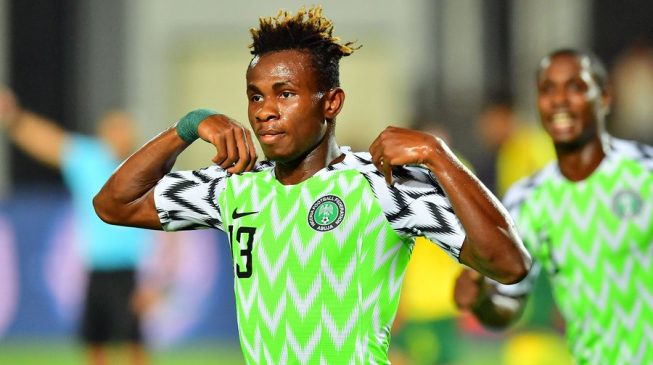 Nigeria qualified for the semi-finals of the 2019 Africa Cup of Nations with a 2-1 win over South Africa at Cairo International Stadium on Wednesday night.
The match got underway at 8pm Nigerian time.
The Super Eagles eliminated a big fish after defeating defending champions Cameroon in an entertaining five-goal thriller.
Bafana Bafana were looking to knock out another African heavyweight when they took on Nigeria.

Fresh from a stunning 1-0 victory over hosts Egypt at the same venue last Saturday, Bafana were looking to send a team 27 places above them in the FIFA World Rankings out of the competition in the form of the Super Eagles.
But Samuel Chukwueze scored the opener with a cool finish beyond goalkeeper Ronwen Williams in the 27th minute to put a dent the South Africa’s hope for a winner.
Alex Iwobi beat his marker and spotted Chukwueze. The winger’s initial effort was deflected to his path and he applied the finishing touch.
Sundowns attacking midfielder, Bongani Zungu, pulled parity for Bafana Bafana with 17 minutes left on the clock.

TheCable reports that it took the intervention of VAR to award the goal to Zungu.
The killer punch was delivered in the 89th minute by William Troost-Ekong.
He poked the ball to the net after Ronwen Williams failed to deal with a left-sided corner.
Chukwueze, who scored his first AFCON goal for Nigeria won the Total Man of the Match award.
Nigeria: Akpeyi, Awaziem, Ekong, Omeruo, Collins, Ndidi, Etebo, Musa, Iwobi, Chukwueze, Ighalo.
South Africa: Williams, Mkhize, Hlanti, Mkhwanazi, Hlatshwayo, Furman, Mokotjo, Zungu, Lorch, Tau, Mothiba.