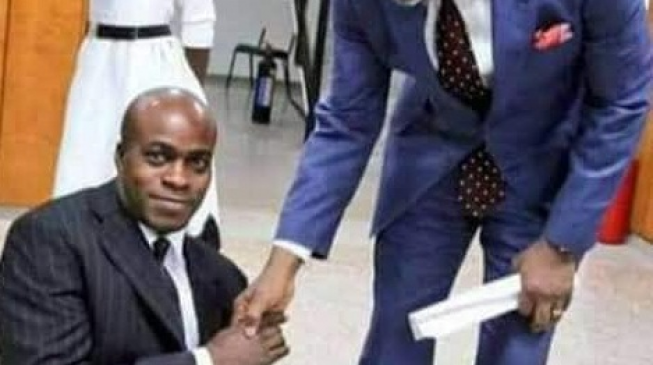 Abdulsalam Kamaldeen is one of the 27 aides that Femi Gbajabiamila, speaker of the house of representative, appointed on Tuesday. Nigeria’s number four man named Kamaldeen his special assistant on special needs and equal opportunities.
Beyond the glittering headlines, Gbajabiamila’s interest in Kamaldeen, 49-year-old physically-challenged lawyer, came to the fore two years ago. As the house majority leader, Gbajabiamila discovered Kamaldeen and invited him to the floor of the green chamber in 2017 for special recognition. His was a story of long-suffering, perseverance, hope and victory.
Culled from TheCable, only a few know about the story of this man whose childhood knew no sweetness. In defiance of the gloomy realities, one after the other, he subdued the overwhelming challenges surrounding his background to give life a new meaning. For some, life is a journey; for Kamaldeen, life is a battle.

ADVERTISEMENT
LOST HIS LEGS TO POLIO AT THREE
Kamaldeen became physically challenged at the age of three due to polio infection. A year after, he lost his mother. According to him, his father never cared about the welfare of his children or showed interest whether they were in school or not. After the death of his mother, there was no one to cater for him and his four siblings. However, his father married another wife who birthed six more children.
In 1978, at the age of eight, he started primary education at Erin-Ile, Kwara state, where he hails from.
THE THIRST FOR EDUCATION AGAINST ALL ODDS
In an interview with The Nation, he narrated his struggles to acquire education against all odds.
“As a kid, I watched all my peers go to school at Erinle Muslim Primary School, leaving me lonely at home. Soon I developed the habit of following them to school, where we played together and studied together, without anybody stopping me. I even wrote tests and examinations with them,” he said.
“However, when it was promotion time, all my friends were promoted but I wasn’t. I went to ask what class I was and got a shocking news. I was told that I was not one of the registered pupils, and that they only allowed me because they didn’t want me to feel bad. That was in 1987 and I should have been promoted to primary one.
“I went home saddened. Luckily my father was home; I told him my experience but he was not bothered. He was to go back in another four days but I insisted he registered me before leaving.
“He said I was too young and cripple and therefore would not be able to contend with the rigours or defend myself. But I told him I had never experienced any bullying, yet he refused. Even his mother, my grandmother, supported him, until the neighbours intervened. Finally, he registered me but told me I would be on my own. I was only eight years old.”
THE STRUGGLE FOR SURVIVAL
Left with no choice, Kamaldeen started begging for alms to survive.
“Inevitably, I had to devise a way of surviving. That was how my journey into begging started. In the morning I’d go to school; on market days, I made very good use of the 30-minute long-break by going to the market to beg. On other days, I would go in the evening around 4pm to beg,” he said.
In 1992, he finished his primary education and moved to secondary school. Then, the challenges became tougher. On a fateful day, he boarded a train from Offa to Lagos where he continued begging for alms and sleeping under the Dosunmu bridge at Idumota. From the proceeds, he would go back to Erinle to pay for fees and continue schooling. He would return to Lagos during holidays to beg.
“That was how I managed to pay my way through secondary school until 1999 and relocated to Lagos,” he said.
KEEPING THE DREAM AGLOW
When Kamaldeen finally rented an apartment in Ajegunle, a suburb of Lagos, he began to attend evening classes and started trading too.
“I started saving and when I had saved about N40, 000, I started doing business. I would go to Ore, buy Kolanut, and take it to Maiduguri. Coming back, I would buy sacks of beans; but I didn’t have a shop, so the only means of selling was to offload them into other people’s shops,” he said.

In 2006, he got admitted to study political science at the University of Lagos (UNILAG). He graduated in 2010, yet he had no respite as he had not fulfilled his dreams of becoming a lawyer.
He sat for the Joint Admission Matriculation Board (JAMB) examination again and got an offer to study law at the UNILAG in 2010, same year he graduated from political science department. At the end of his law degree, Kamaldeen proceeded to the Nigerian Law School and passed all his papers at first sitting. He was called to bar in 2016.