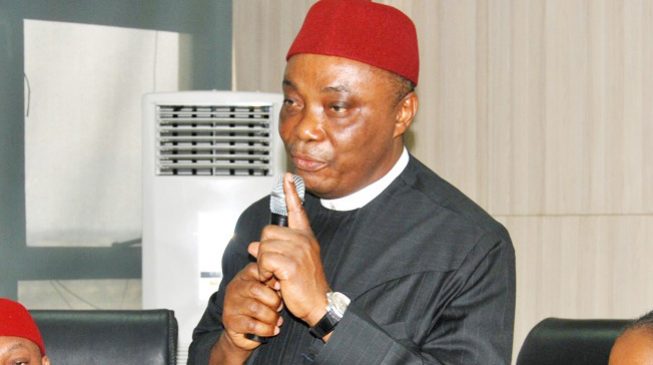 A federal high court sitting in Abuja has ordered an interim forfeiture of properties belonging to Peter Nwaoboshi, lawmaker representing Delta north senatorial district.
Delivering judgment in suit no FHC/ABJ/CS/1127/18 filed by the special presidential investigation panel (SPIP) for the recovery of public property on behalf of the federal government, Taiwo Taiwo, a judge, also placed a “post-no-debit order” on 22 bank accounts “linked to Nwaoboshi”.
According to the ruling, 14 properties and 22 bank accounts linked to the senator are to be temporarily forfeited to the federal government.
TheCable reports that the two forfeiture order read: “That interim order is hereby made forfeiting all the property alleged belong to the 1st Respondent (Nwaoboshi) being suspicious assets or assets far and beyond the legitimate income of the 1st Respondent particularly those on the amended schedule to this application pending the investigation or motion on notice in the matter.
Advertisement

“That an order is hereby made restraining the 2nd-5th Respondents from posting any debt or withdrawals on all the accounts belonging to the first respondents particularly those on the amended schedule to the application attached to this order.”
The order, which was signed by Blessing Chibuzo-Ugwu, the court registrar, also said any person with interest or third party interest in the listed properties should within 30 days show reasons why the properties should not be permanently forfeited to the federal government.
While the 22 bank accounts are domiciled in four different commercial banks, the forfeited properties are located in Delta, Abuja and Lagos.
The lawmaker had earlier been referred to the office of the department of public prosecutions, ministry of justice by SPIP led by Okoi Obono-Obla for allegedly making false assets declaration in his form CCB1 submitted to the Code of Conduct Bureau.
A three-count charge was also filed against him for alleged false declaration of his assets.
The charges were filed by the office of the director of the public prosecution of the federation (DPPF) at the Code of Conduct Tribunal (CCB).