Dabiri-Erewa: Nigerian migrants bombed in Libya were about to return home 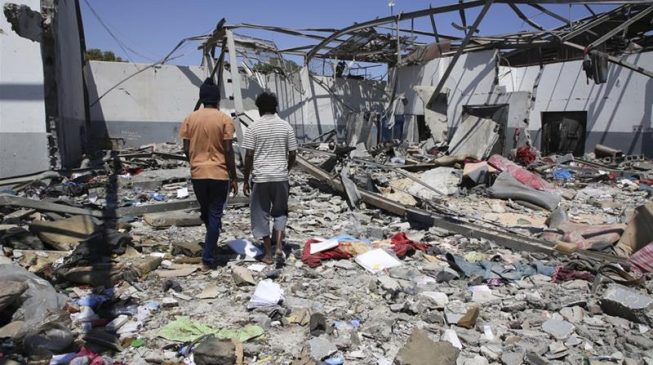 Abike Dabiri-Erewa, executive chairman, Nigerians in Diaspora Commission (NIDCOM), says nine Nigerians were killed in the airstrike on a migrants’ camp in Tripoli, capital of Libya.
At least 44 people were killed while as many as 130 sustained injuries in the incident which happened on Tuesday.
In a statement on Thursday, TheCable reports that Dabiri-Erewa, said the Nigerians killed in the camp were due to be airlifted back to the country.
Advertisement

She said it was regrettable that the migrants survived a “treacherous journey” only to be killed in someone else’s war in Libya.
“It is disheartening that nine Nigerians have been identified as victims in the unfortunate incident,” she said in a statement which Abdur-Rahman Balogun, her media aide, issued on her behalf.
“Nigerians, who were due to be airlifted back to Nigeria, were cut down in their prime.”
She called on Nigerians, especially the youth, to shun movement into hostile countries.
According to her, if they must travel, they should do so legally with a legitimate mission to those countries.
She noted that more than 13.000 migrants had been brought back to Nigeria from Libya, and expressed appreciation to the International Organisation for Migration (IOM), National Emergency Management Authority (NEMA) and other international agencies involved in the evacuation of the migrants.
Photo credit: AP