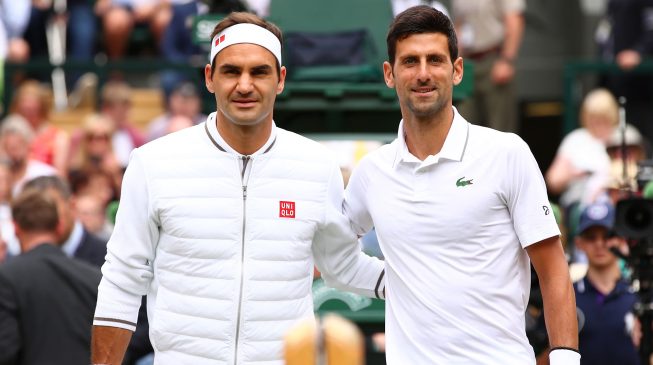 Novak Djokovic successfully defended his Wimbledon Open title with a gutsy performance against Rodger Federer — and the crowd, overcoming the Swiss maestro 7-6 (7-5) 1-6 7-6 (7-4) 4-6 13-12 (6-3) in a five-set thriller.
According to TheCable, the game, which lasted four hours, 57 minutes is the longest singles final in the tournament history.
The Serbian World number One won this title on tie-breakers in the first, third and in the final fifth set where he saved two championship points at 7-8 to defeat the 38-year-old Federer.

The perennial rivals again served the crowd and the tennis world another match for the ages, Federer working his back hand slices and delivered 26 aces.
Djokovic, who did not earn a break point until the fourth set, however, punished record 20-time Grand Slam winner Federer, with long rallies to wear down the father of twins.
Both players held their serves in the first set but Djokovic, who has now defeated Federer 26 times in 47 encounters, blazed through the tie break to hold a first-set advantage which Federer obliterated in the second set with a crushing 6-1 win.
Djokovic, known for his mental strength even in the face of adversary from all corners, claimed the third set- again on tie break- to set himself on course for the Championship as the 15-time Grand Slam winner has not lost a final when up 2-1 in sets.
The statistic was ominous for Federer who has lost 100% when 2-1 down (seven finals) but with his wife, Marka, and dad on centre court, he rallied back to take the fourth set 6-4 and set up a tense fifth-set finale.
Djokovic, 32, would however outlast his older adversary, saving two championship points when down 7-8 and 15-40 down in game 16, and never looked back.

The 2019 Australian Open winner would again dominate Federer on the tie break, winning 6-3 to close-out the title after four hours and fifty-eight minutes of play.
The win means Djokovic has won four of the last five Grand Slam tournaments, and would look to add to his 15 Slam haul at the US Open in August as he continues his chase of the Swiss Master’s record haul.