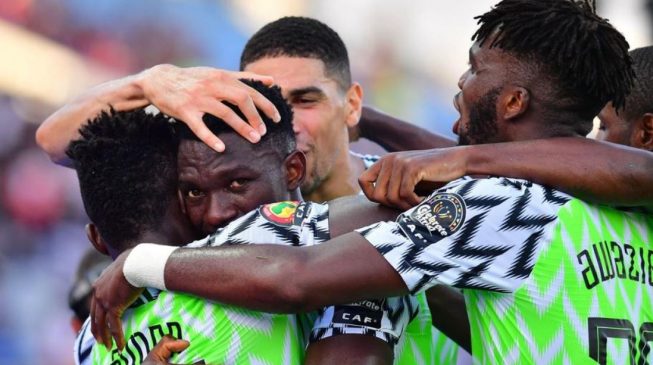 The Super Eagles won the round of 16 match against Cameroon to qualify for the quarter-finals of the 2019 African Cup of Nations match holding in Egypt.
TheCable reports that Nigeria won the match, scoring three goals against Cameroon’s two.
Gernot Rohr, Super Eagles coach, restored the team that pipped Guinea after the horrific loss to Madagascar in the final group B game.
His decision appeared to pay off as Odion Ighalo prodded home a snap shot from Kenneth Omeruo in the 19th minute.

The Eagles went into slumber and allowed Cameroon take charge of affairs within the space of four minutes.
Christian Bassagog created space before delivering a deadly cross to Stephane Bahoken who showed gratitude with a smart finish.
Things fell apart for Nigeria when the tricky Clinton Njie dusted Ola Aina and put the at the underside of Daniel Akpeyi.
Three-time Africa Cup of Nations champions Nigeria came out in the second half with renewed vigor.
The introduction of Samuel Chukwueze, smartness of Ahmed Musa, playmaking skills of Alex Iwobi and the finishing touch of Odion Ighalo helped the Eagles win the game.
Three minutes after the hour, it was all square in Alexandria.
A sweeping Nigeria move brought about the equaliser as Ahmed Musa chested a cross into the path of Odion Ighalo to volley into the net from close range.
The derby turned into an AFCON classic as Nigeria restored their lead. Alex Iwobi kept his cool to fire past goalkeeper Andre Onana after Odion Ighalo turned provider with a clever pass to tee-up his team-mate. It was a lovely finish by the Arsenal man and suddenly Cameroon, the holders, were behind.
Nigeria will meet the winner of the game between hosts Egypt and South Africa in the quarter finals.