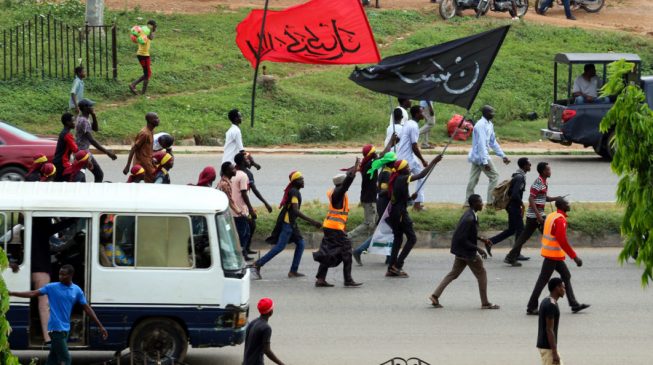 The federal government has officially proscribed activities of the Islamic Movement in Nigeria (IMN) led by Ibraheem El-Zakzaky.
According to TheCable Mohammed Adamu, inspector-general of police, announced this at a press conference in Abuja on Tuesday.
ADVERTISEMENT
Accusing IMN of pledging allegiance to a foreign country, Adamu said anyone who associates with the group will be treated as “an enemy of state”.
A federal high court in Abuja had declared the group a terrorist organisation, following an ex parte application filed by the federal government.
“The activities of the Islamic Movement in Nigeria led by Sheik Ibrahim El-Zakzaky has over time evolved to constitute a grave threat to national security, law and order, socio-religious harmony, peace, good governance and the sovereign integrity of the Federal Republic of Nigeria,” he said.
“The members of the IMN have engaged in extreme radicalism, series of terror-related activities, violence and other unlawful activities which are inimical to the national security interest, good governance, and the corporate existence of the Federal Republic of Nigeria. Some of these nefarious activities include the following:
“Pledging allegiance to foreign countries from where they are enjoying political, financial and training support with the aim of advancing their destabilizing intents within Nigeria.
“Unauthorized blocking of public highways, engagement in illegal road blocks, imposition of illegal curfews and checkpoints, raids on security assets, prevention of arrest of their members, invasion of court premises to abort legal proceedings involving IMN members, refusal to submit to ordinary security checks and attacks on security agents which led to the death of several Nigerians.
“Setting up of a para-military guard known as ‘HURRAS’ through which IMN has been terrorizing local residents. They have also instituted unregistered security outfits and performed paramilitary ceremonies, hoisting of flags, combat exercises, parades and inspection by the IMN leader reminiscent of a State authority.”
He said over the years, IMN manifested its “penchant for launching attacks on Nigerians and the symbols of state authority.
Adamu cited numerous protests by the group, including the one which led to the deaths of Usman Umar, a deputy commissioner of police, and Precious Owolabi, a Channels TV reporter.
“Let me affirm that in relation to the Islamic Movement in Nigeria, in view of their increasing engagement of terror tactics and other violent and subversive activities which contravene the Terrorism Prevention Act 2013, as amended, and vide the judicial pronouncement of the Federal High Court, Abuja on 26th July, 2019, the federal government has classified them as a terrorist group and has accordingly, proscribed the El-Zakzaky-led Islamic Movement in Nigeria,” he said.
“In consequence, henceforth, any person engaged or associating, in any manner that could advance the activities of the proscribed Islamic Movement in Nigeria, shall be treated as a terrorist, enemy of the State, and a subversive element and shall be brought to justice within the context of the Terrorism Act. The import of this is that all forms of procession or protest by IMN is now illegal and thus banned.”
However, Adamu made it clear that the Shiites were free to carry on with their faith.
“For purpose of clarification, Nigeria is a secular state with constitution provisions guaranteeing the freedom to practice our faith. This, however, must be exercised in a manner that will not threaten our national security,” he said.
“Hence, it is to be emphasised that while all adherents of the Shiite sect in Nigeria remain free to continue to practice their faith and shall be guaranteed adequate security to so do as the judicial order does not stop them, the El-Zakzaky-led Shiite Islamic Movement in Nigeria which does not recognise nor accept the constitution and government of the federation is the sole organisation that has been classified as a terrorist organisation and proscribed.”
ADVERTISEMENT
The IGP also discussed strategies of the police in checking insecurity, giving update on the number of suspects arrested across the nation for alleged involvement in criminality.