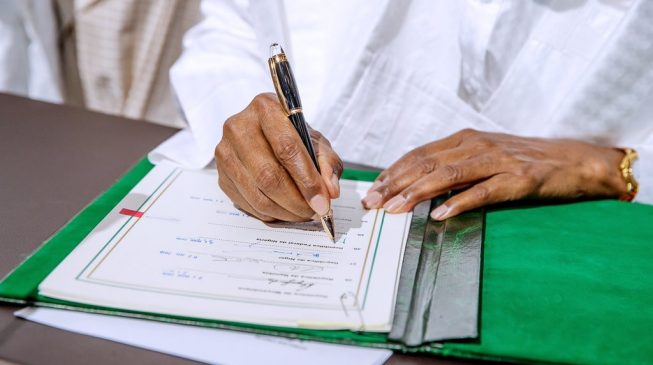 President Muhammad Buhari has finally signed the African Continental Free Trade Area (AfCFTA) agreement.
AfCFTA is a trade agreement between AU member states with the goal of creating a single market followed by free movement and a single-currency union.
According to TheCable, the president signed it at the 12th extraordinary session of the assembly of the union on AfCFTA and the first mid-year coordination meeting of the African Union (AU) and the regional economic communities (RECs) in Niamey, Niger Republic.
The president signed the agreement at exactly 10:48am, making Nigeria the 53rd country on the continent to append its signature to the document.
Buhari had said he delayed signing the agreement “to give room for extensive consultations with stakeholders”.

He had set up a committee to assess impact of Nigeria joining the free trade area. In June, the committee submitted its report to the president, recommending that Nigeria sign the treaty.
Twenty four countries have already ratified the AfCFTA which is expected to be the world’s largest free trade area since the formation of the World Trade Organization. It has a potential market of 1.2 billion people and a gross domestic product (GDP) of $2.5 trillion, across all 55 member states of the AU.
The extraordinary session of the assembly of the union also launched the operational instruments of the agreement establishing AfCFTA.
The instruments are AfCFTA rules of origin, tariff concession portals, portal on monitoring and elimination of non-tariff barriers, digital payments and clearing systems and African Trade and Observatory Dashboard.
Buhari signed the deal one week after members of the Economic Community of West African States (ECOWAS) agreed to launch ECO, proposed single currency in the region.
The heads of the 15-member countries reached this decision at the 55th ordinary session of ECOWAS in Abuja.
Photo credit: Bayo Omoboriowo