Ganduje: We don’t share same feeling with those telling herdsmen to leave south 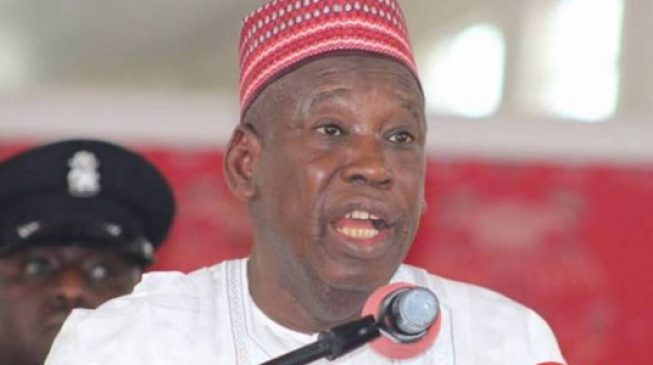 Abdullahi Ganduje, governor of Kano state, has rejected calls by some northern political leaders that herdsmen in the southern part of the country relocate to the north.
According to a statement by Abba Anwar, chief secretary to Ganduje, the governor spoke during a special dinner organised to honour Boniface Ibekwe, Eze Ndigbo Kano, on his 10th Offalla anniversary, at the government house, on Saturday.
Reacting to the calls by northern elders asking herdsmen to leave the southern part of the country, TheCable reports that Ganduje said Nigeria as a heterogeneous society calls for mutual respect among different people.

ADVERTISEMENT
He also said herdsmen must respect the laws of people they live with.
“Those who are calling on the Fulani to leave South, we don’t share the same feeling with them,” Ganduje said.
“People have a choice, as far as the Nigerian constitution is concerned, to live wherever they chose to. But they must respect the laws and cultures of those they are living with.
“As we are all creatures of Allah, it is duty-bound on all of us to always respect Allah’s creatures. No two way about it.”
According to the statement, Ganduje called on the federal government to put a “halt to the ever-increasing movement” of herders from one state to another.”
“Herders should drop the cultural attachment to their rearing activities and make their rearing become economically beneficial,” he said.
“It is because we want to bring out economic benefit out of the whole exercise that we inaugurated a RUGA Settlement Committee for us to have it in Kano.
“And to most fundamentally, move away from the insecurity posture poses by the herders’ farmers clashes everywhere.”
Ganduje also reiterated his commitment towards making sure that the Ruga project takes off in Kano.
He said: “It is through that we can be able to educate our Fulani brothers and sisters. And I have been nurturing this idea long before now.
“That was why we sent Fulani youth, 75 of them, to Turkey to be trained on Artificial Insemination. They are back now. So we need to put them into good use for society.
“I was born in RUGA (hamlet). I was educated while my parents believed and understood the dire need to educate their children and the children of others. If not because of that Allah’s Blessing I wouldn’t have this opportunity to stand before you. ”
On his part, Ibekwe said the order by the northern elders does not mean well for the “corporate existence of our dear country.”
“Look at what is happening now, some people are calling on Fulani to come back to the North. So if they come back what will happen to us here in the North?,” he asked.

ADVERTISEMENT
“Our people will tell us to go back to the South. Is that what our forefathers wished to see us doing? We are therefore rejecting such call coming from some quarters.”
Ibekwe also urged his people (Igbos) to be law-abiding citizens, saying “we are very happy that we are safe in the hands of our governor, Dr Abdullahi Umar Ganduje. Kano is the safest place in Nigeria.”