Goje’s lawyer: Why AGF dropped charges against my client 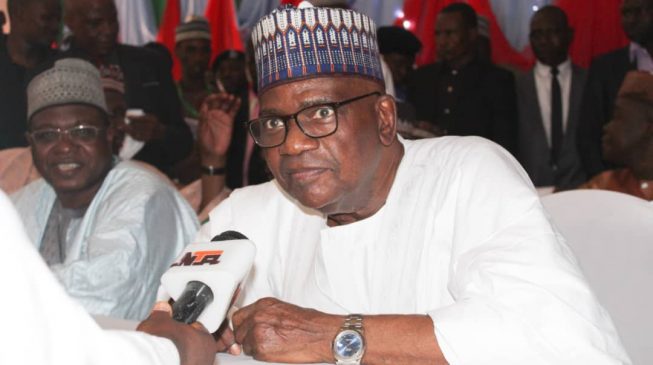 Paul Erokoro, counsel to Danjuma Goje, a former governor of Gombe  state, says it is not surprising that the attorney-general of the federation (AGF) dropped charges against his client.
Goje alongside Aliyu El-Nafaty, chairman of the state’s Universal Basic Education Board (SUBEB), stood trial over an alleged N5 billion fraud.
Of the 21 counts filed, 19 were squashed by a federal high court in Jos, leaving two.


ADVERTISEMENT
However, the two counts against Goje, who currently represents Gombe central, was withdrawn by the office of the attorney-general of the federation (AGF) on July 6 – one month after meeting President Muhammadu Buhari over the national assembly leadership election.
According to TheCable, in a statement on Thursday, Erokoro described the charges as “an embarrassing triviality”.
“The two counts of the charge that were withdrawn by the attorney-general were an embarrassing triviality. The charges had become more of persecution than prosecution,” the lawyer said.
“It was therefore no surprise to those familiar with the case when the attorney-general of the federation withdrew those ridiculous charges.
“The attorney-general did the right thing and should be commended for saving the face and the resources of the government, by terminating the futile proceedings.”
The counsel noted that during the proceedings, the prosecution’s star witness exonerated the former governor, hence the squashing of the 19 counts by the court.
“The prosecution’s own witnesses completely exonerated the defendants. It was this reason that the 19 counts were all dismissed by the court, on the No Case submission,” he said.
“The two remaining counts challenged the Governor’s power to approve the recommendation of the commissioner of finance that the old, unserviceable buses of Gombe Line, be sold to the public, following the purchase of new ones.
“As every adult in Nigeria knows, the sale of unserviceable vehicles is a routine exercise periodically undertaken by the government and even by private organisations. This is the first time that the authority of a governor to approve such a sale has been made the subject of a criminal charge.

“The overused buses, many of which had become scraps, had been in use as commercial passenger vehicles for seven to eight years. The buses were valued by a proper board of survey at the cumulative sum of N22.5m. That value was realised from the sale and the proceeds were paid into the account of the Gombe state government.
“The prosecution witnesses all testified that the procedure was proper and that the Governor did not buy any of the buses and took no benefit personally from the sale.”