I don’t know them, says Tinubu on group rallying for his ‘2023 presidential bid’ 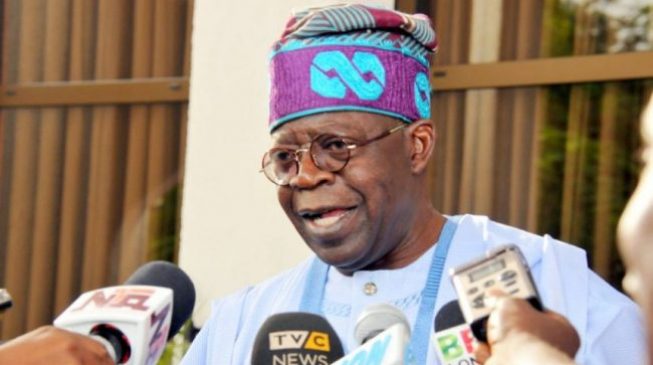 Bola Tinubu, a national leader of the All Progressives Congress (APC), says he does not have any affiliations with a group sharing materials branded for his alleged 2023 presidential campaign.
In a statement issued by Tunde Rahman, his spokesman, TheCable reports that Tinubu denied any knowledge of the group, named “Asiwaju Reloaded Ambassadors”, which branded shirts, caps and leaflets bearing his name.
The former Lagos governor also described as “faceless” the group sharing “unsolicited and unwarranted” promotional with his names.

“We have seen pictures of face caps, T shirts, shirts and even leaflets with Bola Tinubu 2023 embossed on them purportedly by a faceless group which christened itself ‘Asiwaju Reloaded Ambassadors’ Nigeria’. Neither the group nor its souvenirs are known to Asiwaju Bola Tinubu,” the statement read.
“We hereby, through this medium, categorically deny any knowledge of the group and dissociate Asiwaju Tinubu from the group’s unsolicited and unwarranted materials.”
Tanko Yakasai, elder statesman and political adviser in the second Republic, had said the APC might field Tinubu or Vice-President Yemi Osinbajo as its presidential candidate in 2023.

Adeseye Ogunlewe, former minister of works, had also said that Tinubu is the ideal person to succeed President Muhammadu Buhari.
In April, the former governor had earlier denounced reports that he was planning to strengthen his presidential ambition by planting his allies in key positions at the national assembly.