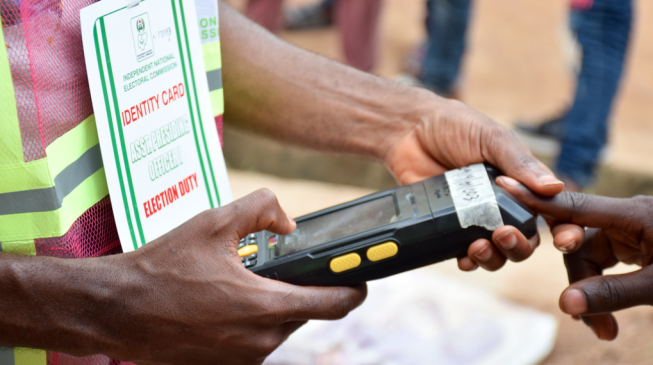 Olufemi Ogunrinde, an ad hoc official during the presidential election, says he transmitted results of the election to a server of the Independent Electoral Commission (INEC).
While being cross-examined at the presidential election petition tribunal by Muiz Banire, counsel of the All Progressives Congress (APC), TheCable reports that Ogunrinde said the results were transmitted through the smart card readers.
“All I know is that the presiding officer brought the form EC8C and I put in the information on the smart card reader which I transmitted to the server,” he said.

When he was asked if he had seen the server, he said no, but added that he was told about its existence by an INEC official.
Citing figures from INEC server, Atiku Abubakar, PDP presidential candidate, claimed that he defeated President Muhammadu Buhari in the election.
The electoral commission had declared that Buhari polled 15,191,847 votes to defeat the former vice-president who secured 11, 262,978 but Atiku said figures from INEC server showed he polled 18,356,732 votes while Buhari secured 16,741,430 votes.
Also, Silas Paris, a local government agent of the Peoples Democratic Party (PDP) in the last general election, said he signed form EC8C “under duress”.
Paris was a local government agent in Gombe state.
While being cross-examined at the tribunal by Alex Izinyon, counsel to Buhari, the agent, number 128 on the petitioner’s list, said PDP members were intimidated by thugs who allegedly worked for the APC.
“I signed the form EC8C under duress. The APC [members] were there,” he said.
Paris alleged that when he reported to the police, they did not do anything.
Husseini Haruna, said 6,067 votes were cancelled in six voting points in Biliri local government of Gombe.