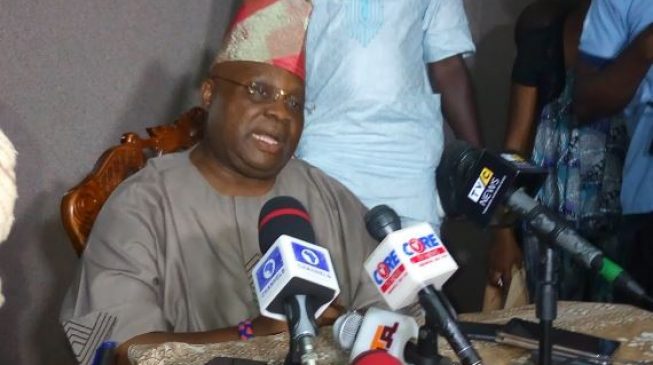 Ademola Adeleke, candidate of the Peoples Democratic Party (PDP) in the Osun state governorship election, has congratulated Gboyega Oyetola, governor of the state, over his victory at the supreme court.
The supreme court had upheld the election of Oyetola, candidate of the APC, in the September governorship election.
In a statement by Olawale Rasheed, his spokesman, TheCable reports that Adeleke said the judgement remained final, regardless of his misgivings.
He added that his ambition to be the governor of the state was never a “do-or-die affair”.
“As a democrat and law-abiding citizen, I accept the ruling no matter my misgivings,” he said.
Advertisement

“I wish Governor Oyetola well in the governance of Osun State. In all circumstances, we must thank God Almighty. We gallantly fought a good fight in pursuance of a democratic cause. The ideals we fought for lives on.
“Our ambition was never a do-or-die affair. We aspired to serve and deliver democratic dividends to the people of Osun state. Our ambition was altruistic. We wish Governor Oyetola the best in the governance of the state.”
The Independent National Electoral Commission (INEC) had declared Oyetola winner of the election after a rerun in September 2018.
Dissatisfied with INEC’s declaration, Adeleke filed a petition at the tribunal and he was declared winner of the election but Oyetola appealed the verdict of the tribunal.
In May, the appeal court gave judgement in favour of the APC candidate. The court had set aside the entire proceedings of the tribunal, saying the panel was not well constituted.
But delivering judgement on Friday, Bode Rhodes-Vivour, a judge, held that the appeal court was right to set aside the entire proceedings of the tribunal.
The judge said the failure of J. Obiora, a member of tribunal, to attend proceedings on February 6 rendered the judgement a “nullity.”
The judge also said the certified true copy (CTC) was not signed by Obiora. He, therefore, dismissed Adeleke’s appeal.