I would have made you sweat, Abaribe tells Akpabio at ministerial screening 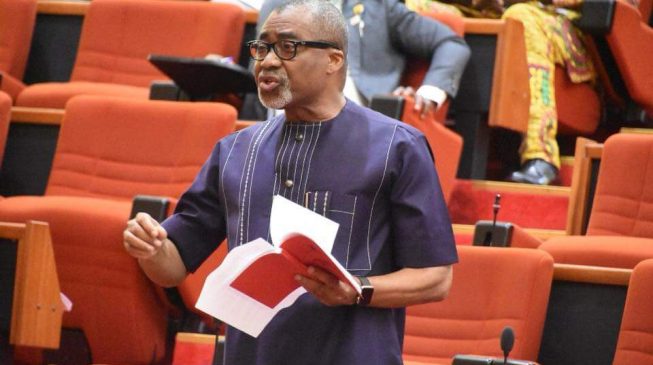 Enyinnaya Abaribe, a Peoples Democratic Party (PDP) senator from Abia state, says he would have made Godswill Akpabio, former governor of Akwa Ibom sweat, at the ministerial screening.
He spoke when Akpabio appeared before the senate for screening on Wednesday.
ADVERTISEMENT
According to TheCable, the PDP lawmaker said he would have asked Akpabio tough questions but for the tradition of the senate which allows former lawmakers to “take a bow and go”.
Akpabio represented Akwa Ibom north-west senatorial district between 2015 and 2019. He was minority leader of the PDP caucus before he defected to the All Progressives Congress (APC) before the last general election.
“I would have made Godswill sweat… We know that as an uncommon person, you will work very uncommonly to make sure the relation between the chamber and the villa is uncommon,” he said.
Earlier, Akpabio had said as an “uncommon performer”, he would keep rendering “uncommon services” to Nigeria.
Akpabio said some of the roads he built as governor of Akwa Ibom have not had potholes 11 years after they were built.
He also taunted Dino Melaye, senator representing Kogi west, who had told him that they would meet on “the streets of Abuja” during the valedictory session of the senate led by Bukola Saraki.
Melaye had made veiled reference to Akpabio’s loss in the election.
“I will continue to offer uncommon services to Nigeria through the current platform; with integrity, dedication and love. I left office many years ago and on the roads I did, there is not one pothole 11 years after. I rest my case on the CV before you,” he said.
ADVERTISEMENT
“It is my firm belief that the only way we can touch the lives of the average man in he society is through his hallowed chambers. Nothing really to say than what you already know; I am regarded as uncommon performer in any place I go.”