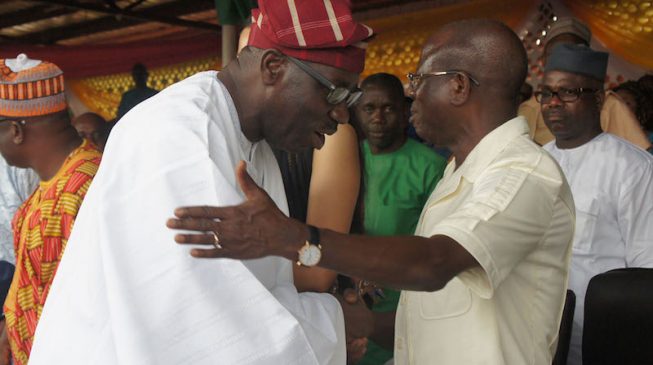 Godwin Obaseki, governor of Edo state, says he will probe contracts for construction of structures and supply of equipment to Benin Central Hospital.
The contracts were executed by the administration of Adams Oshiomhole, Obaseki’s predecessor, who is currently national chairman of the All Progressives Congress (APC).
In a statement which Crusoe Osage, his spokesman, issued on his behalf, Obaseki said the action was necessitated by numerous calls on the government to look into the contracts in which billions of taxpayers’ money were expended on “poorly executed projects”.
He said he would set up a commission of inquiry to ascertain if details of contract terms were adhered to, especially the quality of materials used for the building.

Culled from TheCable, Osagie said the panel would also determine the “extent of irregularities” regarding the purchase of equipment among others.
“The state government will investigate allegations of fraud and irregularities with the contract for procurement of the hospital equipment,” he said.
He said the panel would also unravel why the equipment contracted were yet to be supplied and other claims made by the contractors.
“The contractors who handled the building had questions to answer including the shoddy jobs done among others,” he said.
Osagie said works were ongoing at the hospital to patch up parts of the hospital, as parts of the poorly constructed facilities leading to collapse of the roof in some sections.
The statement was issued one day after Obaseki dismissed reports that he had issues to sort out with Oshiomhole.
He had told reporters in Abuja that the state  is only experiencing minor political issues which are being resolved.
A delegation from Edo had visited President Muhammadu Buhari last week, calling on him to reconcile Obaseki and the national chairman of the All Progressives Congress (APC).
The disagreement between the duo had led to the factionalisation of the Edo assembly.
The APC chairman was said to be plotting the removal of the governor but Obaseki succeeded in having his loyalists in control of the legislative chamber.