IMN: Three of our members arrested on Monday have died in police custody 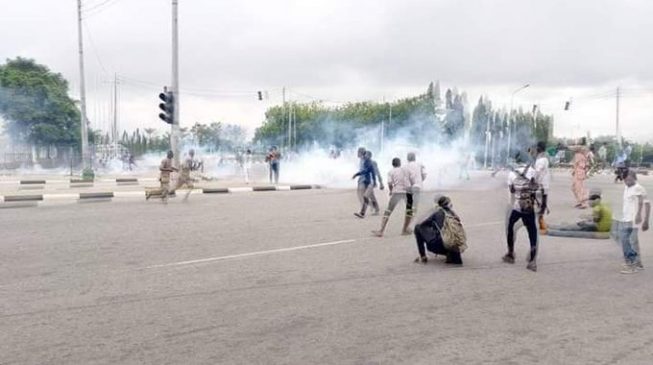 The Islamic Movement in Nigeria (IMN) has alleged that the refusal of the police to grant treatment to its wounded members in custody has led to the death of three of them.
In a statement on Friday, Ibrahim Musa, president of IMN media forum, said the detainees have been held at SARS headquarters in Abuja since Monday.
ADVERTISEMENT
The group said over 100 of its members who sustained injuries during Monday’s protest were arrested by the police “from their sickbed”.
TheCable reports that Musa said three detainees died of bullet wound on Wednesday. He said more detainees, including women and a minor, might die in custody.
The spokesman called on the international community to intervene in the ” inhumanity taking place at the dreaded headquarters of SARS where unarmed citizens are kept in dehumanizing conditions.”
“Reports reaching the Islamic Movement in Nigeria have confirmed the death of 3 detainees, who were shot and held in Police custody at SARS headquarters, Abuja since Monday 22/07/19. They died on Wednesday 24/07/2019 because of bullet wounds they sustained during the free Zakzaky protest early in the week,” the statement read.
“Not only that, more might die in police custody, because there are at least 15 people who are in the detention centre with various degrees of bullet wounds, without medication. Among them are women and a minor who has his leg shot.
“All entries made by relatives of the detainees for the police authorities to allow them have medication have fallen on deaf ears, an indication that they are waiting for them to slowly die in excruciating pains.
“It is unfortunate that when it comes to dealing with the Shiites, the security agencies throw all known laws and conventions to the dogs, and indulge in savagery as exhibited when the police on Wednesday dumped a Muslim brother of the Islamic Movement by the roadside after torturing him and pouring boiling water over him.
“We also call on the police to hand over to us the wounded persons so that at least their lives can be saved. The dead bodies of the supporters of the Islamic Movement should be handed to us also, so that their families can give them a befitting Islamic funeral rite. Burying them in mass graves is a war crime which the police should be wary off in the future.”
ADVERTISEMENT
Members of IMN had taken to the streets of Abuja to demand the release of their leader clashed with the police earlier in the week.
Asked to react to the allegation of IMN, Anjuguri Manzah, spokesman of the federal capital teritorry (FCT) police command, told TheCable: “We don’t have anything like that; nothing like that happened.”