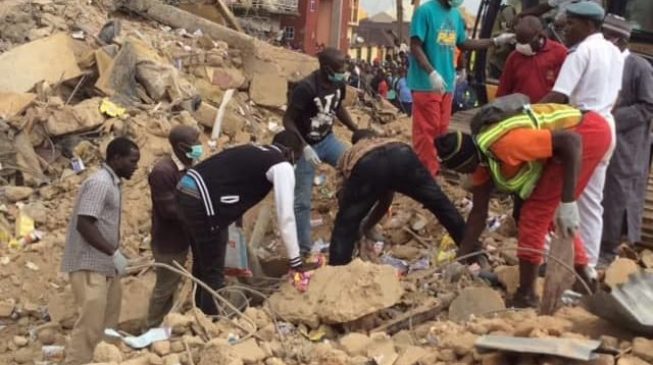 The National Emergency Management Agency (NEMA) says 14 people died as a result of the three-storey building which collapsed in Jos, Plateau state.
The incident occurred in Jos north local government area of the state on Monday.
ADVERTISEMENT
According to TheCable, Nurudeen Musa, head, search and rescue operations at the north-central office of NEMA, who disclosed the casualty figure on Tuesday, said four people also sustained injuries.
He said the injured were currently receiving treatment at the Plateau Specialist Hospital and Bingham University Teaching Hospital.
The building, which houses a pharmacy and a public toilet, is said to belong to one Rufai Kabiru. Kabiru and his pregnant daughter are said to be among the victims.
“As at this afternoon, we recorded 14 deaths and four persons severely injured in the collapsed building,’’ Musa said.

He said joint rescue operation is being carried out by a joint team from NEMA, State Emergency Management Agency (SEMA) and the International Red Cross and security agencies.