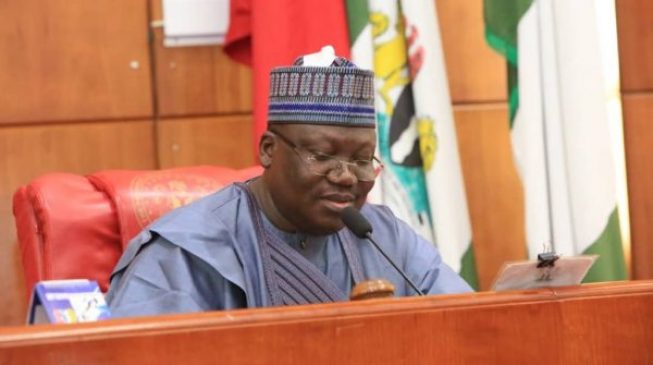 Senate President Ahmad Lawan says he will not be a “rubber stamp” to the executive.
Mohammed Isa, a media aide to Lawan, quoted the senate president as saying this when he received Women Parliamentarians, a group led by Joy Emordi, former senator representing Anambra north.
TheCable reports that Lawan said it is “laughable” that he is being referred to as “rubber stamp”, vowing that the senate under him would challenge the government of President Muhammadu Buhari but “in a decent manner”.

“There is no time that I will ever be a rubber stamp,” he said.
“Yes, I believe in President Buhari as a person and I believe in my party, the APC, but I believe that our problems as Nigerians are Nigerian problems. They are neither APC nor PDP problems, they are Nigerian problems that require Nigerian solution. So, we have to work together.
“We will be there for the executive arm of government all the time in moving this country forward. We are going to challenge the executive in a manner that is decent but decisive. As a minister, you have to do your ministerial job well.
“We will make government appointees to do what is required of them. We have to deal with the issues confronting us. It is not going to be easy, but we have to build a relationship that have mutual respect, collaboration and partnership. It is achievable.”

The senate president urged the women to be more involved in politics, saying: “the political space in the country is wide enough to accommodate our women.”
On her part, Emordi urged Lawan and his colleagues to work for the good of Nigerians.