Magu on anti-graft war: Collaboration with some countries has been fruitless 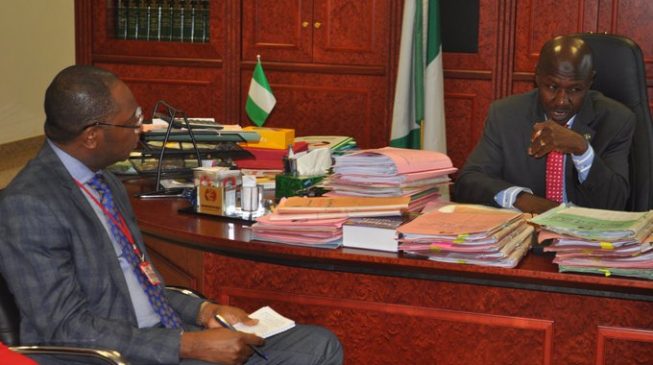 Ibrahim Magu, acting chairman of the Economic and Financial Crimes Commission (EFCC), says the commission encounters difficulties in repatriating stolen funds.
According to Tony Orilade, the commission’s spokesman, Magu said this when Joe Abah, director of DAI Nigeria, visited him at his office in Abuja on Friday.
ADVERTISEMENT
DAI is an international development firm implementing programmes covering governance in more than 100 countries worldwide.
TheCable reports that the EFCC acting chairman said collaboration with some foreign anti-graft agencies has led to little or no result.
He appealed to the international law enforcement agencies to assist in making the efforts of the agency less frustrating.
“We have done everything possible, gone out of our way to encourage our sister agencies, but cooperation is almost NIL,” he said.
“We have been investigating a number of cases for over four years working with the Federal Bureau of Investigations, National Crimes Agency and even the Crown Prosecution Service.
“We have done everything possible, gone out of our way to encourage our sister agencies, but except there is a third party involved, there is no cooperation.
“We are willing to go outside this country to give evidence, and to share the intelligence that we have.”
In his address, Abah commended the EFCC under the leadership of Magu.
He said the visit was part of efforts aimed at supporting the anti-corruption crusade in Nigeria.
“We recognise the valuable work EFCC is doing to preventing, investigating, prosecuting and combating financial and economic crimes,” he said.
Magu had earlier accused the UK authorities of being too slow with the prosecution of Diezani Alison-Madueke, former minister of petroleum.
ADVERTISEMENT
He said no kobo had been recovered from the $2.4 billion allegedly looted by the ex-minister.