‘Many trapped’ as building collapses in Jos 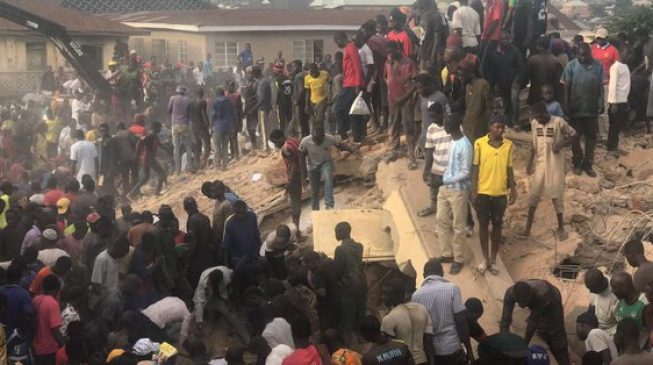 A three-story building collapsed in Jos, Plateau state capital, on Monday, leaving many residents trapped.
TheCable reports that the building, which houses a pharmacy and a public toilet, is located at Butcher lane, off Dilimi street in Jos north local government area of the state.


ADVERTISEMENT
At least six persons have reportedly been evacuated from the collapsed building and taken to the Bingham University Teaching Hospital, Jos, for medical treatment.
Rescue operation is being carried out by a combined team of Nigeria Emergency Management Agency (NEMA), State Emergency Management Agency (SEMA), the Red Cross and security agencies
Kefas Yilrwang, acting managing director, Jos Metropolitan Development Board (JMDB), said lack of equipment is hampering the rescue operation.
Yilrwang also said absence of the facility had compelled operatives to conduct the rescue work manually.
He also said that the operation was not well organised as many people in the neighborhood were trooping to the scene of the incident to rescue people that were trapped in rubbles.
“Everyone wants to help and the whole place is jam-packed, making it difficult for rescuing agents to perform their duties,” he said.

The acting managing director, however said the operation would continue till the following day.