Nigeria Vs Cameroon: Five things to know ahead of the crucial tie 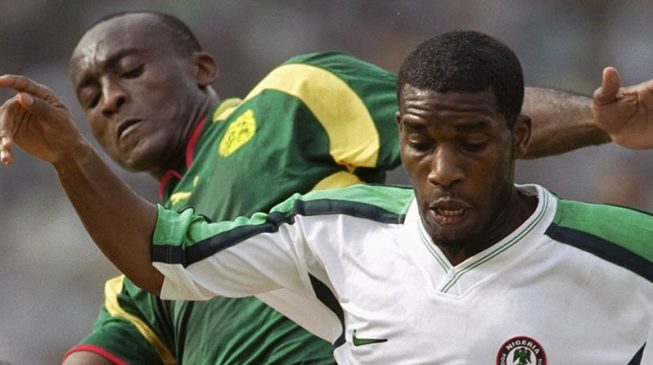 Nigeria versus Cameroon is one of the greatest rivalries in African football. The last competitive match between both countries in 2004 left Nigeria with an upper hand, thanks to a sublime free kick from Jay Jay Okocha, TheCable reports.
Prior to this Cameroon has stopped Nigeria on the way to AFCON victory more than a once, enhancing a fierce rivalry between both teams.
Here are five things to know as the West African rivals go to the battlefield on Saturday at the Alexandria stadium in the Round of 16 of the Africa Cup of Nations.

Nigeria’s smooth start hit a couple of bumps in Alexandria with a loss to Madagascar and, more crucially, an injury to captain John Obi Mikel.
He is in doubt to play the second round against Cameroon and his knee injury might be serious enough to keep him out of the rest of the tournament. That’ll be a big blow to Nigeria, which is once again trying to end a long wait for an African Cup title — six years and counting.
Waiting for Nigeria in the round of 16 in Alexandria on Saturday is Cameroon, a team that is yet to concede in Egypt.

The pre-tournament hype over Eric-Maxim Choupo-Moting was justified. He has been involved in the two goals scored by the defending champions so far. Expect him fresh and raring to go for Cameroon in Alexandria on Saturday.

Cameroon may not be the best-attacking team to watch but its reputation as a well-drilled unit under Dutch coach Clarence Seedorf was underlined by the fact that it’s yet to concede a goal. A solid defence is a big plus in knockout games.

The last time both sides clash at the prestigious AFCON, Nigeria fought back from a goal down to win 2-1 in 2004. Samuel Eto’o Fils put the Indomitable Lions in front.
A beautiful free kick taken by legendary Austin Jay Jay Okocha helped the Super Eagles level matters before John Chukwudi Utaka popped up with a much-needed winner for Nigeria.

Cameroon is unbeaten in the last nine games at the ongoing tournament, and this is historic, as it is their longest streak in the competition. As for Nigeria, the Super Eagles lost the last match in the tournament against Madagascar.
Will Nigeria end Cameroon’s unbeaten run.