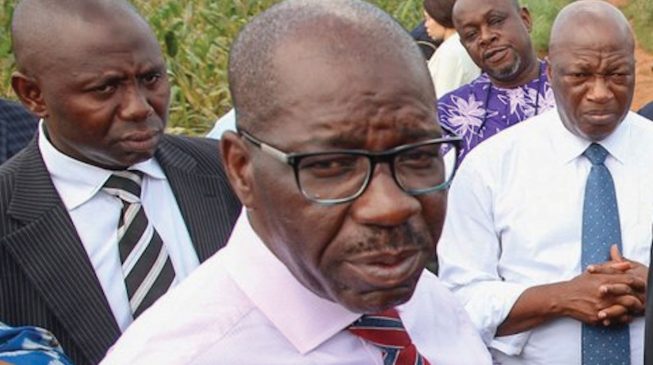 Godwin Obaseki, governor of Edo state, says Adams Oshiomhole, national leader of the All Progressives Congress (APC), taught him to fight godfathers.
According to Obaseki, Oshiomhole, a former governor of the state, started the crusade of fighting Edo godfathers in 2006.
TheCable reports that the governor said he would uphold the legacy as it has favoured the people of the state.

He spoke while receiving the house of representatives ad hoc committee set up to look into the Edo assembly crisis.
The state had split into two factions following a disagreement between Obaseki and Oshiomhole. The APC national chairman was accused of plotting to install his loyalists as principal officials of the assembly in a bid to oust the governor.
On June 17, nine lawmakers loyal to the governor took 15 loyalists of Oshiomhole unaware and organised a “secret inauguration”.
Speaking through Philip Shaibu, his deputy, Obaseki called on pro-Oshiomhole lawmakers to avail themselves the opportunity to be sworn in after which the crisis in the house could be resolved.
“What we have here is somebody trying to use the house to control the executive. We feel that we have fought godfather. Oshiomhole led us to a strong fight to rescue the state from the hands of godfathers in 2006,” Obaseki said.
“We have joined the crusade Oshiomhole started in 2007. We will not go back on the crusade because it is helping Edo people. We can now galvanise the people because they can see roads, they can see schools and infrastructure. This is because the money that used to go the godfathers now go to the people.
“Oshiomhole has taught us to follow the path of the people. He told us to do the needful and make sure we fight the godfathers and take the money back to the people. That is what he taught us and we will not depart from it.
“Those ones have not been sworn in and they decided to abscond. I have contacted them and some of them told me certain things. I said we will deal with them. I said they must be members of the Assembly first before the discussion will take place.

“Somebody is interested in derailing them and the reality on ground. They are not elected to serve in Abuja. They should come to be sworn in first. I can assure you that I will bridge the gap between the governor and the legislature. We need peace because we want to turn Edo to investment hub.”
On Thursday, Obaseki dared those he described as “Abuja politicians” to take over the state if they could.