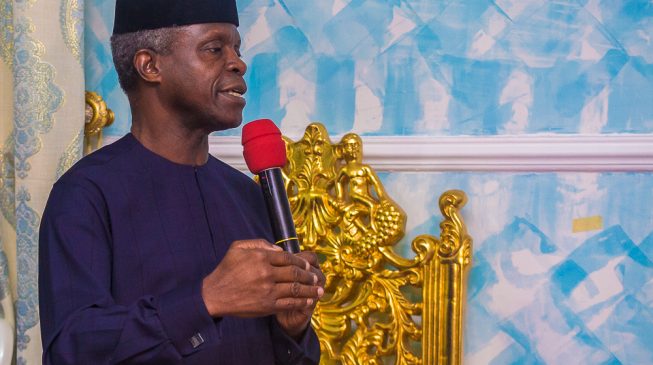 The vice president said the federal government was in the process of investing another N600 billion in the sector.
On further steps to improve power supply in the country, the vice president said the federal government had decided to take a second look at the power sector.
According to him, one of the reasons why there are challenges in the power sector is that each of the distribution companies (DisCos) controls a particular territory.
”And now we are saying that any company that wants to provide power to any territory, should be able to provide power for the territory and the people,” he said.
‘We have been able to break the existing monopoly in the power sector. Whether upgrade or not, the DisCos should be able to serve the people. Another strategy we are trying to introduce is to open up the power sector by restructuring.”
On the second Niger bridge, Osinbajo said the project was very important to the federal government.
According to him, President Muhammadu Buhari did not only negotiate for the equipment being used for the construction of the bridge, but is also paying special attention to the project.
“I was here six weeks ago to look at the progress of the work there and I must say that the project is going on well,” he said.
“I hope that very soon we should be completing not just the bridge, but also all surrounding infrastructure both here in Asaba and the other end of the bridge.”
Earlier, in his address the monarch said poor power supply had been a major challenge in the Delta capital, appealing to the federal government for intervention.

He also appealed to government to establish a federal university in the town as a way of compensating the people of Asaba over the 1967 massacre which claimed many lives.