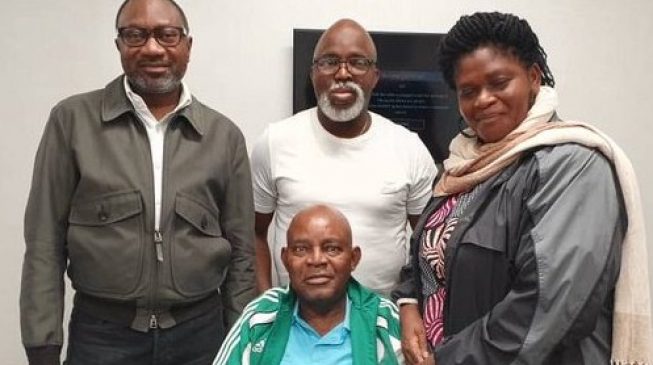 Femi Otedola, billionaire businessman, says he is glad to have assisted Christian Chukwu, former coach of the Super Eagles, recover from prostate cancer.
While receiving Chukwu, who just returned to the country after treatment abroad, TheCable reports that the philanthropist said assisting people is his way of life and he would rather spend money on people than on drinks.
Otedola had voluntarily offered to assist Chukwu when the reports that the former footballer was down with cancer went viral.

The businessman had presented Chukwu with a cheque of $50,000.
“I want to extend my appreciation to Mr. Christian Chukwu for coming down to acknowledge me on his arrival from the United Kingdom, for supporting his medical expenses, although for me, it is just a part of my nature,” he said.
“I was moved when I heard about Mr. Chukwu’s situation because I remember that about 20 years ago, my father, the late Sir Michael Otedola also suffered a stroke from using fake aspirin. This experience has over time made me to appreciate that good medical attention can give a good and prolonged life and that was what motivated me to rise up and assist Mr. Christian Chukwu.
“In my circle of friends, many people spend up to N50 million to drink champagne and generally ‘enjoy’ life, but at the end of it all what happens? It passes out of their body as waste. For me therefore (and I also tell my friends) it is important to use such money to benefit others and put a smile on the faces of as many people as we can.
“To update you, the sum of roughly N36,635,000 has been expended on Mr. Christian Chukwu’s medical and travel expenses and it is my joy that I am spending the money God blessed me with to be of assistance to him.”
He said this gesture is not a one-off affair, as he is currently assisting Peter Fregene, another ailing ex-Super Eagles goalkeeper with his medical bills.
This humanitarian gesture, Otedola said also extends to the entertainment sector, where he is currently responsible for the medical rehabilitation of Victor Olaotan, an actor who was lead character in the soap opera series “Tinsel.”


“So for me, it is just my nature to give back to society and these philanthropic gestures are just a tip of the iceberg. I am humbled by the gratitude being expressed by Mr. Chukwu but I believe that all thanks belong to God and I thank God for putting me in a position to be able to be of assistance,” he said.