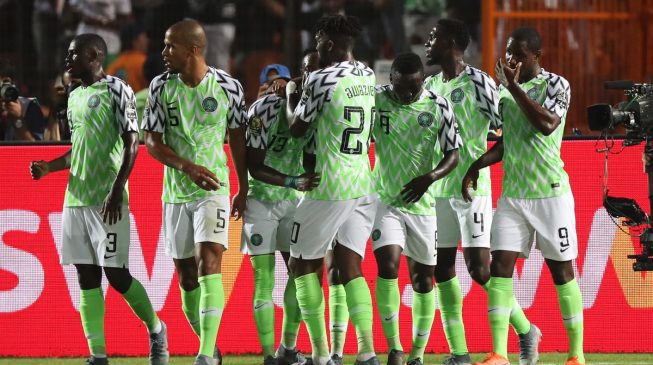 The Super Eagles of Nigeria defeated South Africa 2-1 to join Senegal in the quarterfinals and are just two games away from reclaiming the AFCON trophy they won six years ago.
Despite a VAR-awarded South Africa equalizer, it was an 89th-minute winner from rejuvenated Williams Troost-Ekong- his second international goal- which lifted Nigeria over her perennial opponent.
Gernot Rhor watch
It would be foolhardy to say these Super Eagles are only about pace. German-born coach, Rohr, finally understands the right dynamics in his midfield and error-prone defence. Ndidi and Etebo sat deep all game, leaving only Iwobi to attack centrally.

The full backs also stayed defensive all night, denying South Africa the chance to launch counter-attacks as they did against Egypt who gave them acres of space all around the pitch. It was also gutsy of the coach to take off the electric Ahmed Musa, who dazzled but could not deliver the final pass, for Simon Moses, who created the match winner. Full marks.
Daniel Akpeyi (6/10): Had little to do but his distribution was top notch and good handling skills to boot. Although he picked the ball out of his net, he had a better night.
Kenneth Omeruo (6.5/10): With the disaster of Cameroon still fresh in his mind, Omeruo was strong but cautious in his approach. He kept his game simple, focusing more on his environment than what he could do going forward.
William Troost-Ekong (9/10): Despite having the odd error in him, the Udinese centre back was more involved against Bafana than he had been in all tournament. Won aerial duels around the defence, stopping attacks and finally managed to keep his concentration, scoring the winner a minute from the end. Man of the Match.
Jamilu Collins (7/10): Came in for Ola Aina and it was clear the Paderborn FC defender was drafted for his no-nonsense approach. The 24-year old offered almost nothing going forward but did not waver in his defensive duties although he did look like he hasn’t attained full match fitness.
Chidozie Awaziem (8/10): A more defensive approach from the full back and highly effective. Part of the backline that maintained a deep backline to give the South Africans no joy in the attack.
Suffered crunching challenge from Hlanti in the first period but recovered to deliver a characteristic solid defensive display.
Wilfred Ndidi (8/10): Gladiator in midfield. The patriotic midfielder covered every blade of grass in search of the ball, reclaiming possession quite often and linking defence to attack. Outstanding.
Oghenekaro Etebo (7.5/10): This was one of Etebo’s quieter games but this was because he sat deeper than he usually does to mop up behind Ndidi who gave almost nothing away. The Stoke City man still carried out his primary duties with aplomb and nearly scored from a brilliant free kick from 30 yards.
Alex Iwobi (7/10): Getting better with each game. The Arsenal man did a mini Jay-Jay Okocha to lose his man and deliver the assist for Chukwueze’s goal. Narrowly shot wide in the second period and brilliantly acted as the playmaker of the team.
Ahmed Musa (6.5/10): Captain Nigeria. The 26-year-old winger led by example as he never stopped running both in attack and defence. Most successful attacking moves by the Super Eagles came through his pace and determination, starting the move for Chukwueze’s goal.
However, he let the team down with the lack of a quality delivery or pass to deliver the telling blow. Really wants to win this for Keshi but has to improve on his final balls.

Samuel Chukwueze (9/10): Found no joy on the wing as South African full-back, Hlanti stayed back. He, however, drifted infield in search of space and minutes later, scored the opener- his first international goal- at the second attempt.
Space opened up in the second half and with his pace and trickery, the Villareal wonderkid roasted his markers at every opportunity. Man of the Match.
Odion Ighalo (5/10): The China man endured a poor night, given no space to operate and marshalled whenever he dropped deep to feed on scraps.
Unlucky to provide the assist for South Africa’s equalizer and he could have redeemed himself in injury time but was thwarted by the keeper. It was not a good game by the 30-year-old’s standard.
Substitutes
Moses Simon (3/5): Replaced Ahmed Musa ten minutes from the end but he did not have much success in his dribbling attempts like his predecessor did. The Levante winger, however, provided the much-needed final ball for the winner, his corner kick converted by Troost-Ekong.
Leon Balogun: Came on in stoppage time more as a time-wasting substitute than to shore the backline.

This report by Jonathan Ledger was first published on TheCable