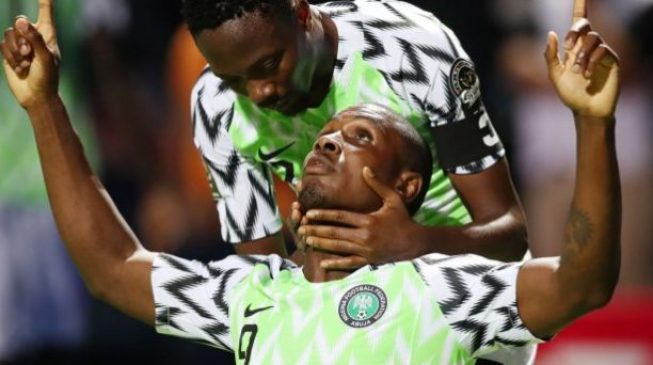 It was a barnstorming second half from the Super Eagles of Nigeria who had to come from being 1-2 down to tame the not-so-indomitable lions Cameroon 3-2 at Alexandria stadium.
This comeback win was made possible by the leaders of the team, Ahmed Musa and Odion Ighalo, who stopped the AFCON holders’ title defence.
A report by Jonathan Ledger for TheCable, outlines that the highlights included Ighalo’s brace,Musa’s industry and more importantly, the successful midfield battle won by the duo of Wilfred Ndidi and Oghenekaro Etebo.
They robbed Eric Chuopo-Moting of space which the PSG forward used to wreak havoc late in the first half.
It was both the beautiful and disturbing from the Super Eagles’ players in this game of high drama, which players soared high?

Daniel Akpeyi (4/10): It must be a point of bother for the nation how the technical crew are confident with an error-prone Akpeyi who looks a time bomb waiting to happen. He was jittery all game and his sense of judgment was poor. He failed to deal with a routine cross and was later beaten at his near post- a goalkeeper’s nightmare- for Cameroon’s second goal. Apart from stopping Aina from a calamitous own goal, his only job was picking out the balls from his net
Chidozie Awaziem (6/10): Defensively solid as usual and with the help of Moses Simon, locked down the right wing until he was faced with Bassogog in the last quarter of the first half. Did not stay close to the winger who flashed two dangerous crosses, one resulting in the equalizer. Stayed closer to his opponent in the second half and this solved the problem, sort of.
Ola Aina (5/10): Dealt well with the dangerous Bassogog, stopping the winger from wreaking havoc before the winger changed wings. Things changed when he faced Clinton Njie, losing the winger’s position for the second goal before Omeruo lost the aerial duel. Improved in the second half.
Kenneth Omeruo (5/10): Started the first half well, keeping Choupo-Moting in check and stopping numerous attacks. However, he finished the first half in jittery mode, failing to clear a low cross and the lurking Bahoken made him pay. Three minutes later, he was beaten in the air by Choupo-Moting which led to Cameroon’s second goal.
William Troost-Ekong (5/10): Quiet and unconvincing display despite the raging storm of a game. The Udinese man was part of an error-strewn backline that lost concentration in the first half. Like Akpeyi, he is a disaster waiting to happen.
Wilfred Ndidi (7/10): Made to work harder than usual and did not disappoint. Harried Cameroon’s midfielders into submission in another very effective display from the ball-winning midfielder. Took him until the start of the second half to solve the problem of Chuopo-Moting who dropped into the space behind him. The Cameroon forward did not have a sniff in the second half. An impactful player who always looks motivated.
Oghenekaro Etebo (7/10): The Warri-born Stoke City FC midfielder’s constant impressive midfield displays cannot go unmentioned. The bulky 23-year-old was his usual industrial self, covering every blade in the middle of the pitch, helping out in defence and recycling possession while also starting attacks. A lovely pass into space which Ahmed Musa ran onto in space almost resulted in the second goal. He, in conjunction with Ndidi, locked down the midfield in the second half.
Ahmed Musa (8/10): The captain’s pace was a constant worry for the Indomitable Lions’ defence throughout this feisty West African derby. He won and delivered the free kick which led to the Eagles’ opener. Assisted the Eagles’ equalizing second goal with a wonderful chest down for Ighalo and started the move for third. The 26-year-old Al Nassr of Saudi Arabia could have scored but was brilliantly denied by Onana. Man of the Match.
Moses Simon (5/10): So much endeavor but lacked the trickery or imagination against a defence that had not conceded in this tournament until now. Failed to capitalize when Oyongo slipped in the box in the first half. Sacrificed early in the second half.
Alex Iwobi (6/10): Much more involved in the first twenty minutes of this match than he had been in the games he’d featured in this tournament. Although the game flew past him the whole half, the Arsenal attacking midfielder improved in the second period and tucked away the winning goal with a well-placed shot.
Odion Ighalo (8/10): Goal poacher. The 30-year-old got a sniff from the free kick melee in the box and made it count with a deflected strike, while he was on hand to complete his brace in the 61st minute from four yards out. Onana denied him a hattrick with two good saves.
Substitutes
Simon Chukwueze (6/10): The winger was more effective than Moses in his cameo appearance. Set up Musa for what should have been the fourth goal.
Paul Onuachu (NR): Brought on five minutes before the end to wind down the clock. Not involved.
Leon Balogun (NR): The central defender who was disastrous against Madagascar was brought on in the 91st minute to close out the game and achieved his objective.